Russia is growing concerned about Chinese designs on Russian territory and resources.   Russian president Dimitry Medvedev said it was essential to defend it's eastern territories against "excessive expansion by bordering states". 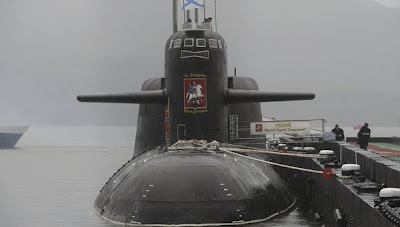 Speaking days after Russia's first deputy defence minister said two new nuclear submarines would be sent to the Pacific Fleet, Medvedev also said it was "important not to allow negative manifestations ... including the formation of enclaves made up of foreign citizens."

His comments, some of the strongest on the subject yet, underlined the Kremlin's suspicions that a steady influx of Chinese migrants may ultimately pose a threat to Russian hegemony in the remote and sparsely populated territories of Siberia and the Far East.

Russia and China enjoy strong diplomatic and trade relations and have joined forces in the United Nations Security Council to block proposed sanctions on President Bashar al-Assad of Syria. But growing Chinese influence in Russia's Far East - where street signs are often in both Russian and Chinese - has long been a source of tension.

Resource-rich Russia is the world's largest country by territory, but has seen its population of 143 million people fall in recent years, while resource-hungry China, situated immediately to the south, has a rising population of over 1.3 billion people.

Russia is busy rebuilding its once powerful navy.   Current plans call for the construction of six new submarines and one aircraft carrier annually.
Posted by The Mound of Sound at 11:32 AM

Russia and Communist China are allies. So are North Korea, Iran and Syria, their allies.

The Russians have fighter jets and ships amassed, in their high north. This is a show of aggression to Canada, over the riches in the high Arctic.

Communist China also hacked into, other country's secret files. Seems it was a mistake to buy electronic components from China. U.S. missiles and other weapons, had infected components, purchased for China in them.

Trust Harper, to be stupid enough, to sell off the dirty tar sands to Communist China.

Yes, Russia and China are allies - today - but they also have a major unresolved territorial dispute and, if you'll recall, a very turbulent past. Their alliance isn't immune to stresses and suspicion.