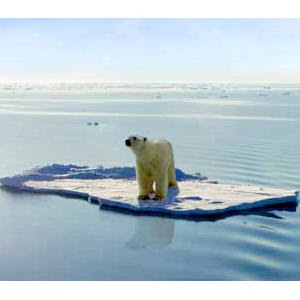 The Arctic is about more than ice and polar bears.  Much, much more.

Most of us by now have become familiar with El Nino or his ugly stepsister, La Nina, that are lumped together as something called ENSO, the "southern oscillation."   They each bring droughts and floods only in different places.  But they originate in the south Pacific Ocean.

Now, thanks to man-made global warming, we have created something similar in the Arctic.   The loss of sea ice warms the waters of the Arctic Ocean and that, in turn, warms the atmosphere in the Arctic region enough to produce some powerful effects in other parts of the northern hemisphere.

Do you remember Britain went through a period of sustained drought that appeared to be endless until the recent bout of flooding hit?   Rivers were drying up.   The entire place was looking at water rationing throughout this summer.   Soggy old Britain was going bone dry.   That just doesn't happen.   And so the Brits' Hadley climate research centre went looking for answers - and found just what it was looking for.

Now Brits are being warned that their "damp days" are probably over.

"...scientists at the Met Office's world-renowned Hadley research centre in Exeter, the question was not just how fast Greenland was melting, but something much trickier. They have been crunching through years of data from dozens of satellites, trying to establish whether the conditions in the Arctic circle are related to the record-breaking washout of a summer in the UK.
"We will see lots more floods, droughts, such as we've had this year in the UK," says Peter Stott, leader of the climate change monitoring and attribution team at the Met Office. "Climate change is not a nice slow progression where the global climate warms by a few degrees. It means a much greater variability, far more extremes of weather."

...The impression that many Britons have had that summer weather has been getting worse in recent years is borne out by the data – five out of the last six years (2007-2012), have shown below-average sunshine from June to August, and in some cases well below average. All have had above-average rainfall – in some cases more than 50% above the long-term average. "It is not just a perception – we have had a run of relatively poor summers," says Stott.

This year has been the worst so far. April was the wettest on record, and so was the period from April to June. The sun was missing too – June was the second dullest recorded. Hopes that August might bring more settled weather were dashed when the first few days brought floods as far apart as Scotland and Somerset, forcing scores of people from their homes. The unseasonally wet and miserable summer may have failed to dampen the Olympic spirit but it has brought misery to thousands.

Nor has the UK been alone in suffering extreme weather. In the US, the eastern seaboard has been hit by heatwaves and storms but even worse has been the "dustbowl effect" in Texas and across much of the nation's agricultural heartland. India's monsoon failed to appear on schedule, leaving millions of farmers in the subcontinent facing destitution. Floods in Beijing, after the heaviest rainfall in 60 years, caused devastation to millions.

...Last month, the Met Office and NOAA, the US National Oceanic and Atmospheric Administration, published a groundbreaking report that showed recent events could be attributed to human causes. Last year's unseasonally warm November in the UK – the second hottest since records began in 1659 – was shown to be at least 60 times more likely to have happened because of climate change than because of natural variations in the earth's weather systems.

...Earlier this year, two US scientists published a paper in the journal Geophysical Research Letters, suggesting that the meandering of the jet stream could be linked to the reduction in sea ice. Edward Hanna, reader in climate science at the University of Sheffield, who is taking part in similar research, explains: "The last six summers since 2007, while often rather cool and wet over the UK, have brought Greenland unusually high air pressure, mild southerly winds, record-breaking temperatures and melting of the land ice." The link, he believes, is that Arctic sea-ice losses and the release of heat over the Arctic Ocean have tended to weaken the jet stream and make it more meandering. This has brought more low pressures over Britain, less stable conditions, more cloud cover and rain-bearing weather systems from the Atlantic.

This year, the jet stream moved much more than usual, passing south of the UK. It also persisted in this position for an unusually long time. If this pushing of the jet stream southward is indeed linked to less sea ice over the Arctic circle, as Hanna suspects, then the signs are that we will see many more of these wet summers in future.

...The majority of the most valuable data we have amassed – including the images of Greenland's surface melting – comes from between 20 and 30 satellites that are now under threat. Ageing satellites are being removed from orbit and not replaced, while those that remain are at ever greater risk of buffeting from the debris that now litters space. "There is a severe danger of not being able to see so clearly [from space] in future with the fall-out of satellites, uncertain government funding and so on," says Kate Willett of the Hadley Centre.

Unless the satellite data continues to stream down, we will never know whether the UK is at risk of a new age of drizzly summers and dry winters, and drought alternating with flooding.
Meanwhile in Greenland, inhabitants have been basking in an almost unheard-of heat, regularly topping 20C, with a succession of dry sunny days dominating the weather over the past two months. "It's been lovely here, much warmer than usual – we've really been enjoying a nice summer," says Henrik Stendal from his offices in Nuuk, the capital. British staycationers can only shiver in envy."

You see, it's all connected.   The impacts of climate change in one place reverberate powerfully elsewhere.   These aren't distant predictions.  They're here now and they're here to stay.   Sure they'll grow and worsen over time and with every supertanker of bitumen we send to Asia we speed that process along just a little bit.
Posted by The Mound of Sound at 10:44 AM