Where Has All the Wildlife Gone? 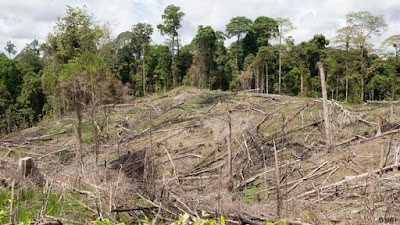 The latest Living Planet Report has been released.

A few years ago the World Wildlife Fund in conjunction with the London Zoological Society and other groups issued a LPR that found terrestrial life on Earth had declined 50% in total since 1970, The following year's Living Planet Report surveyed marine life - fish, marine mammals, sea birds - and found a similar 50% decline since 1970.

Global wildlife could plunge to a 67 per cent level of decline in just the fifty-year period ending this decade as a result of human activities, according to WWF’s Living Planet Report 2016. The report shows how people are overpowering the planet for the first time in Earth’s history and highlights the changes needed in the way society is fed and fuelled.

According to the report, global populations of fish, birds, mammals, amphibians and reptiles have already declined by 58 per cent between 1970 and 2012, the most recent year with available data. This places the world on a trajectory of a potential two-thirds decline within a span of the half-century ending in 2020.

“Wildlife is disappearing within our lifetimes at an unprecedented rate,” said Marco Lambertini, Director General of WWF International. “This is not just about the wonderful species we all love; Take away species, and these ecosystems will collapse along with biodiversity forms the foundation of healthy forests, rivers and oceans. the clean air, water, food and climate services that they provide us. We have the tools to fix this problem and we need to start using them now if we are serious about preserving a living planet for our own survival and prosperity.

“Human behaviour continues to drive the decline of wildlife populations globally, with particular impact in freshwater habitats. Importantly however, these are declines, they are not yet extinctions – and this should be a wake-up call to marshal efforts to promote the recovery of these populations,” said Professor Ken Norris, Director of Science at ZSL.

The good news is that we still have time to reverse the worst of this. That would involve a resolution to avert species collapse and an assessment of how to go about ensuring that.  As the decline is human driven, reversing it would mean changing ourselves. It's hard to imagine that we can cling to perpetual exponential growth and do anything but worsen the problem. Unfortunately Canada, like most developed and emerging economies is led by a political caste still in the embrace of constant growth.

We really have to wake up. On a civilizational scale, this massive decline carries ecological impacts that may not be survivable. It's like nature is trying to call and get our attention but nobody's listening.

The important thing to remember is that, when it comes to the decline in wildlife, we have no idea where the tipping point is or even how resilient our global civilization can be to a challenge of this magnitude. We're continuing to grow in numbers, in consumption of already overtaxed resources, in our demands on habitat, in the pollution of all descriptions we leave in our wake. These are the things that are crowding out all other species that share our planet. These are the things that are already savaging their numbers.

We have no interest in stopping.

.. I keep coming back to the wild salmon of the west coast.. Where is mainstream media when we have the most senior public servants whether elected or appointed or hired.. and they are prepared to destroy this keychain species, or others? What sane or intelligent human believes collapsing such a species - in favor of farmed salmon, or via Asian LNG or dilbit supertankers - can happen in isolation? As if the food chain - the marine ecosystems will somehow function without wild salmon, or herring or predators?

I still seethe inside at the travesties of Stephen Harper and his mook Ministers.. agreeing that poisoning boreal wolves was the solution to save the boreal caribou whose habitat is being consumed by tar sands and fracking..

Anyong: With all the religious do-gooders, a person would think that God would have by now done something about the plight of the earth. But hark! Nothing. The question is though, "How do we stop people from thinking more is better. My house, my car, my vactions, my bank account...my, my, my is better and bigger. Therefore I am better than you attitude, from continuing to desecrate the environment"?

"How do we stop people from thinking more is better. My house, my car, my vacations, my bank account...my, my, my is better and bigger?"

My take is that human greed cannot be sufficiently & timely diminished in a required time frame.
Numbers of humans? This can be adjusted relatively quickly...

@ Sal - wouldn't it be great to see a mainstream politician on the right side of the environmental issue? What we have instead is a cabal of technocrats who see these questions first as a matter of economics. Once you run things through that powerful filter many problems can be ignored.

People always aspire to something better and they have since our ancestors kept an eye out for a bigger, dryer cave. That was before the quite recent era of the consumer economy which prioritizes maximum production and maximum consumption. This is achieved through relentless conditioning, primarily in the form of constant advertising. We further it by planned obsolescence. Imagine a kitchen range that's designed to need replacement in 6-7 years. Think of the waste - the resources, the energy, the pollution - from that one small spot in your kitchen. We may be enraged when these things crap out so prematurely but we're consoled by the idea of putting in its place the "latest and greatest" model.

We should be confronting the reality that we are massively over-exploiting the Earth's natural resources. We have allowed ourselves as a global civilization to become absolutely dependent on that unsustainable state of affairs continuing indefinitely. It cannot, of course, but try to find a politician or Titan of Industry not committed to perpetual, exponential growth. Now imagine how you get those policy makers and influence peddlers to do a 180.

I often compare our plight to some grainy film I saw of a gaggle of US Navy groundcrew deployed to assist an anti-submarine dirigible land. As the ship neared the ground, ropes were released. The sailors on the ground grabbed these ropes and were supposed to use them to guide the dirigible into its hangar. At this point a powerful gust of wind caught the airship and pulled it up into the sky. Most of the sailors let go of the mooring lines. Three or four held on for their lives. It wasn't long until their grip failed and, one by one, they fell to their deaths.

In some ways I think our civilization is in the same predicament as those sailors on those ropes.