Be Careful What You Wish For, Rachel

With an election looming and Jason Kenney breathing down her neck, Rachel Notley is spending millions of dollars, 23 million, her government doesn't have to demonize British Columbia as the bane of Alberta's existence. 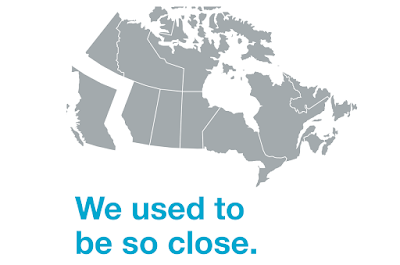 One of Rachel's brain farts is to depict BC as, to use Joe Oliver's word, "inimical" not only to Alberta but the entire rest of Canada as illustrated in this made-in-Alberta graphic.

Using BC as her whipping boy is sleazy. Rachel Notley is a sleazebag.  Then again, as a coastal British Columbian, I look at Notley's graphic with a sense of, oh I don't know, whimsy? For Notley rekindles warm memories of British Columbia's own Rafe Mair, who, a few months before his death, penned this, a call for this province to finally rid ourselves of Canada:


I find I no longer come close to sharing the values Canada now stands for – I’m not talking about opinions but a philosophy of life, a set of basic values.

As a core value, I value the environment above the desire of bankers and developers to make money and bought and paid for politicians to support them. I accept the need for societal sustenance but do not accept plunder in the name of progress.

The flashpoint is the Trudeau supported revival of the Alberta Tar Sands and the Prime Minister compelling BC to sacrifice both principle and its environment to the transport and sale of Tar Sands product to places that will be under no constraints as to its use. I believe Canada must accept responsibility for safeguarding water, land and air in places it exports products and services. I cannot be loyal to a country that has no such values.

...We have to work, eat and survive. But to the Canada exemplified by Trudeau, development, without more than cynical word service for the values I care about, trumps everything. Bear in mind throughout the balance of what I have to say that the Precautionary Principle is the law of Canada.

...These aren’t political quarrels I have with Canada, though I have lots of them. No, these are fundamental values I can’t live without and Justin Trudeau can’t live with. None of these values destroy industry but put it, and what we are deeply committed to in British Columbia, on a level playing field where he who would impact the very essence of our homeland has the onus of proving he will do no harm or none which we whose home it is will not accept.

British Columbia, my home, has been pushed around the 85+ years I have lived, worked, served, loved and, yes, loafed in her. To be called a bad Canadian because I want to protect her wild life and their habitat and don’t want to assist uncaring capitalists and their captive governments to spread ruin here and elsewhere has finally become too much.

I hope you understand but that’s irrelevant, “Here I stand. I cannot do otherwise.”

I miss his wit (and wisdom) every day.

.. I've crossed the Great Divide more than any living family member or friend. Afoot, on skis, trucks, cars.. Approached the 'blue Rockies' (Lightfoot) with agonizing anticipation each and every time. Pitched a tent once right atop it.. we shared out shots of liqeur with strangers from other lands lost or delayed on the trails who were astonished to find our glowing tent in the dark. As a young man we crossed the Divide nightly, to drink legally in BC & return to Alberta happy. Met moose, wolverine, grizzly and black bear, elk, goat, sheep, eagle and hawk, Fox, wolf, deer aplenty.. and in winter saw sign of lynx and bobcat. Plenty o fish too

Funny.. I never noticed a crack in the earth up there.. seperating BC from Alberta. pretty damn sure the wildlife didn't either

Rafe of course was blunt - seen it done it.. had the t-shirt & the tatoo. In the late hears I was stoked to see his friendship with Damien Gillis.. comin down the pathway of those big haunting Rafe footsteps.. as an exemplar he attracted similar.. and he collected exemplars for his own education..

These resource stripping enterprises would be entirely serviced by temporary foreign workers if possible.. at minimum wage. And the First Nations & coherent concerned Albertans or British Columbians would be run off to service Big Energy & Foreign Money. ? So litle of the tar sands product actually goes to Energy Security For Canadians. Its laughable to read the pimping for Energy East.. the Diluted Bitumin or LNG 'gold rush' to Asia.. However that will sacrifice Tourism, The Wild Fisheries, the twin & mated eco-systems of the Land and the Marine Waters. Bye bye keychain species and habitat

It all reminds me that Iceland's tourism industry is anchored in whale watching.. so what th hell are they thinking, letting the Japanese slaughter whales.. in Icelandic waters.. ? Canada just wants to do the same on a far grander scale. The 'Last Redoubt' - that's Canada.. Grr.. its maddening.. but I will double, no triple my resolve

Yes, Notley is a a complete sleazebag and a would-be bully too. Her vindictiveness towards BC a year ago was indicative of her true nature, I believe. Her TV commercials that blight our national airwaves are low-grade horse-manuric propaganda as well.

En masse, Albertans consider themselves a superior race apart, for reasons known only to their sense of entitlement. Kenney, a man after Dingwall's heart, knows entitlement well - he kept his federal MP's salary while campaigning for provincial party leadership in Alberta, and charged us all $10K a year for his parents' Calgary
basement while living in Ottawa. When this jerkass assumes the Emperorship of Alberta, the whining and complaining will reach an even greater fever pitch.

Well then, BM, what are your ideas for going ahead? There are plenty of me to write screeds but those won't get us on the path that includes a future.

Meh, maybe BC should separate from Canada. You're practically a Chinese colony anyhow.