Think of It as Climate Change Adaptation for the Wet Coast 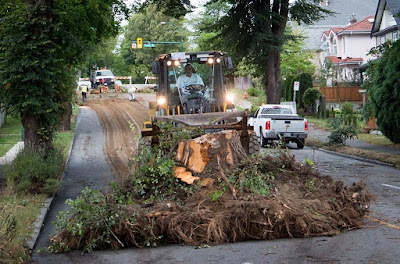 It looks like a trip to the woodshed is in order. No, not metaphorically. It's time to bring in another load of firewood, just in case.  When that's done it would probably be prudent to distribute my now considerable cache of LED flashlights and lanterns where I'll be able to locate at least one if the lights go out.

The latest warning comes as B.C. Hydro reports that last week's storm was the most damaging in the provincial utility's history.  The good news is that BCH is calling for improvements to its infrastructure.


A report from the Crown corporation says the Dec. 20 storm was unlike any previous weather event BC Hydro had encountered.

The report boosts the total number of customers who lost power to 750,000, an increase of 50,000, as winds topping 100 kilometres per hour came from multiple directions.

It says more than 400,000 customers on the Lower Mainland, and nearly 350,000 or about 80 per cent of all customers on Vancouver Island and the Gulf Islands were in the dark, although everyone had their lights back on by Dec. 31.

...A BC Hydro report issued in November warned that storms and extreme weather events are becoming more frequent across the province, and that the number of individual storm events the Crown utility has handled in the last five years has tripled.

“For example, this storm generated more than twice the number of storm-related outages than BC Hydro experienced in all of 2013,” the latest report says.

You see, the problem is that our existing electrical grid and support infrastructure were not designed for today's climate reality. When the storm hits on the 20th and some are left without power until the 31st, something is very wrong. Something needs fixing and soon.

Our being caught short when it comes to infrastructure is, as the years have gone by and the climate-change pattern has become clearer, inexcusable, Mound. But like everything else these days, we seem obsessed only with the present and give nary a thought to the future, when the costs of climate change will become far greater. The void in political leadership is once again stunning.