Think of Climate as a Finely-Tuned Engine Gone Screwy. 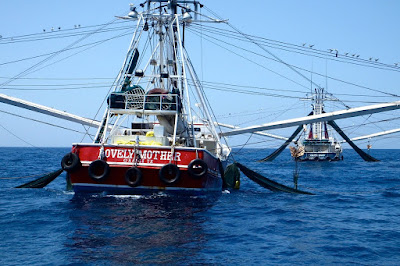 There was a time, we called it the Holocene, when the climate worked for us. A gentle, relatively predictable climate allowed humanity, over the course of 12-thousand years, to grow to one billion in number.  That was somewhere around 1814.

Here we are, a scant two centuries later, at almost 7.7 billion and we're on a roll.  It's projected we'll add another billion (the entirety of humanity in 1814) in about 12-years, roughly the same point by which we're told we'll have to cut our carbon emissions by half. Good luck with that.

The Holocene, by the way, is gone. We now have a new geological epoch, a man-made one, the first of its kind, that we're calling the Anthropocene.  It doesn't have that gentle, relatively predictable climate we enjoyed during the Holocene. A good, albeit sad, example of what we've dished up for ourselves is to be found in the Texas fishing ports on the Gulf of Mexico where the traditional oyster and shrimp fisheries are in peril.

"This is just a dying industry, is what it is," says fourth generation shrimper and oysterman, Scooter Machacek.

He might be right. The sleepy ports along the Gulf Coast of Texas are shadows of what they were just 25 years ago. Then, thousands of smaller bay boats like Scooter's, around 40 feet long, plied the shallow waters around the barrier islands that form the fringed coast.

Thousands more of the larger gulf boats, at least twice the size of bay boats with double outriggers that stretch out like wings, disappeared into the deeper, federally controlled waters of the Gulf of Mexico itself, at least nine nautical miles out to sea, for weeks on end.

...Everything is different now. The decline of the American shellfishing industry is inextricably linked to global systems both economic and environmental. From cheap food imports to hurricanes fueled by a warming planet, these systems support, or strain, the tapestry of what it takes to get seafood to the dinner plates of diners.

...Shrimp constitute the biggest haul along this part of the Texas coast, followed by blue crab and oyster, all of which begin their life cycles in the bays and estuaries that serve as the Gulf of Mexico's nurseries. But those ecosystems are changing. According to the latest National Climate Assessment, the Texas coastline is particularly vulnerable to such climate catastrophes as flooding, drought, increasing storm intensity and sea level rise. These climate change effects can be seen as a "threat multiplier" as they play out in the lives of men like Scooter—bay shrimping from May to November and oystering through the winter—who struggle to keep an industry alive.

Consider, for example, the single factor of rain. Scooter has felt the impact of increasing heavy rainfall.

"We're getting drowned in freshwater," he says. "The rain is crazy. That weather just comes and dumps and dumps and dumps. You used to get these little rains, now it just pours on." This influx of rain leads to a domino effect that's being felt up and down the Gulf coast.

Scooter's sure he'll be one of the downed dominoes. The long line of the family business, he says, it is "going to end with me."

...The Lone Star is a large state, and heavy rains in just about any river drainage can eventually be felt along the Gulf Coast. Excess freshwater comes from too much rain—or, as John Nielsen-Gammon, Texas's state climatologist, puts it, "the same amount of rain, but in more concentrated episodes." In every region of the United States, extreme precipitation events—when it just "dumps and dumps," as Scooter said—are rising along with human carbon emissions. If we can radically reel in emissions by century's end, they'll merely go up by half or maybe double compared to historical averages. If we don't, Americans could get "dumped" up to three times as frequently as they once did.

It makes annual rainfall averages misleading. The Texas coast might still be getting around 45 inches of rain each year. But for oysters—and humans—a deluge can be destructive in ways that steady rains are not.

... The arrival of freshwater can initially be beneficial, bringing nutrients that nourish coastal ecosystems. But too much can easily wreak havoc. Oysters are especially vulnerable. Contained within their rock-hard shells, oysters are powerful filtration systems, but they depend on a certain level of salinity to function. When too much freshwater enters the system, the salinity plummets. The oysters can die, the shells yawning open, empty of life.

Heavy springtime rains can also affect the shrimping industry. They can flush juvenile shrimp out to deep waters prematurely, where they're vulnerable to predation, because, as one biologist explained, "Everything eats shrimp." Flooding also brings a host of hazards in its wake. Storm debris can knock out ship propellers and tear up shrimp nets. Polluting effluents come from the region's prodigious petrochemical industries along with fertilizers from farm blitzes upstream. "When they spray the cotton to defoliate it," Scooter says, "and you get a rain after that, it wipes everything out, kills everything." And those who seek wild shrimp look askance at the growing number of shrimp farms, worried about exotic species and disease outbreaks.

The oceans are the poster boy of climate change. Aquatic species seem to be more temperature sensitive and most of them have the option of migrating to cooler waters, something that we're experiencing on both our Atlantic and Pacific coasts.  It's hard to know what to make of the arrival of these new species in our local waters but they're here.

.. I worked a shrimper briefly out of Corpus Christi.. of all the bad things I did to my hands.. probably the worst. Hardy folks akin to our maritimers were the shrimpers. Right now we have a fragile remaining national treasure.. very similar on a stupendously more robust marine coast. Yes that would would be British Columbia. And somehow its seen more as an exit point called 'tidewater' for petroleum exports to Asia to enrich 'our economy'. Sadly we must extirpate habitat and species to achieve such 'nation building' - and whether inland or coastal marine is irrelevant. The creatures and environment are in the way. Oh, forget the boreal caribou there in the interior.. gotta be sacrificed, recall the iconic 25c piece, close to worthless anyway.. I cannot list the species that will crash and burn in the headlong political wet dream to Asian export.. and 'jobs jobs jobs' because I'm not a wildlife biologist.. But we have obvious alternatives, policies to enact, progress to be made. We do not have to 'be like Trump' and frack national parks or wildlife preserves, or trash fresh water. We are not a 'frontier to pillage' - we do not need to bury First Nations deeper in misery or ruin our inland waters.. or screw our coastal environments. How are the east coast fisheries doing, bye the bye ? Still dead ? We learn nothing ? How about east coast lumbering ? OK we are good out there re potatos and the offshore oil is sweet .. but why is Alberta overstocked with east coast maritimers and temporary foreign workers ?


I just read in the Seattle Times that two of their Puget Sound orcas have suddenly taken ill and aren't expected to make it to summer.

We need to figure out how to defend this amazing coastal ecosystem. Part of that entails mapping the migration of southern marine life - fish, mammals and sea birds - into our waters, predicting what's coming and how to respond to them. That's complicated, especially when it comes to deciding what native species can and should be protected and what have to be lost.

Then there's the growing problem of man-made pollution, the stuff that's now entering the food chain at the seabed and working its way up, bioconcentrating in dangerous levels as it progresses upward even into the salmon and their predators, the orca. Imagine the devastation a seabed spill of sludge bitumen laced with acids, carcinogens and heavy metals that will leach into the food chain for decades will cause. That, of itself, justifies ousting the federal jurisdiction even if that means going it alone.

When I was seven years old, the company my father worked for sent us to Texas for six months. We weren't far from Corpus Christi. I dont' remember much from that time. But I remember that shrimping was big business. Like so many other things, climate change is resshaping that -- and our own -- world.

.. anyone interested can follow the thread we had Mound, re east coast malpeque oysters. They take 5-7 years to 'cultivate' must be harvested via giant chopsticks from dories.. it takes family traditions and families to do so.. its just like dairy farming in that way, or husbandry of any such resource. But for the most part - 99.9 % Canadians write off west coast First Nations as 'eccentrics' at best.. for crying out at their shellfish and herring being trashed.. the bringing of the supertankers and the Orca being abandoned means nothing to 'prairie boys' Scheer or Kenney.. or Trudeau. 'Price of Progress', 'nation building' and the Economy they say