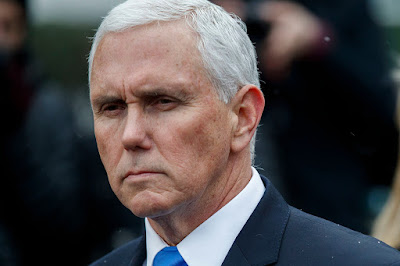 Is there no end to this silver-haired prick?

Speaking on Sunday on CBS' Face the Nation, the vice president quoted from King's "I Have a Dream" speech as he defended Trump's latest pitch to secure funding for a barrier along the United States' southern border. The budget impasse over the wall has resulted in the longest government shutdown in history, one that has left thousands of federal workers without pay.

"One of my favourite quotes from Dr King was, 'Now is the time to make real the promises of democracy'," Pence said. "You think of how he changed America. He inspired us to change through the legislative process, to become a more perfect union.'

"That's exactly what President Trump is calling on Congress to do," Pence continued. "Come to the table in the spirit of good faith. We'll secure our border. We'll reopen the government, and we'll move our nation forward as the president said yesterday to even a broader discussion about immigration reform in the months ahead."

The reaction was swift and, understandably, indignant.


Pence's comments about King drew immediate pushback from Democrats, including Californian Jackie Speier, who said Trump "is no MLK."

"To equate the legacy of one of America's finest statesmen and champions of civil rights with a vanity project built on racist ideology and hatred is beyond disgraceful," Speier tweeted.

The NAACP called Pence's comments "an insult" to King's legacy.