But Only If We Want It Badly Enough 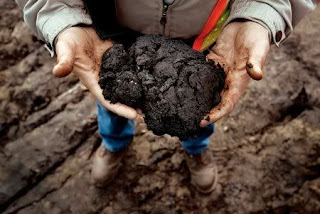 As the clock runs down on the time we have remaining to thwart catastrophic climate change we have to decide if we want that badly enough to do what we must for our grandkids and generations to follow them.

Then Potsdam Institute director, Hans Joachim Schellnhuber, told the delegates to the 2015 Paris climate summit what it would take - nothing less than the "induced implosion" of the global fossil fuel industry. What he meant was that governments would have to shut down the coal mines, the oil and gas wells and the bitumen pits and in short order.  Nothing less than a rapid transition to alternative, clean energy would buy us a fighting chance at averting runaway global warming and climate mayhem.

The Guardian reports on research that says we can still probably do it if we want to choose life over ruin.


It shows that meeting the internationally agreed aspiration of keeping global warming to less than 1.5C above pre-industrial levels is still possible. The scientists say it is therefore the choices being made by global society, not physics, which is the obstacle to meeting the goal.

The study found that if all fossil fuel infrastructure – power plants, factories, vehicles, ships and planes – from now on are replaced by zero-carbon alternatives at the end of their useful lives, there is a 66% chance of staying under 1.5C.

Christopher Smith, of the University of Leeds, who led the research, said: “It’s good news from a geophysical point of view. But on the other side of the coin, the [immediate fossil fuel phaseout] is really at the limit of what we could we possibly do. We are basically saying we can’t build anything now that emits fossil fuels.”

Nicholas Stern, of the London School of Economics, who was not part of the research team, said: “We are rapidly approaching the end of the age of fossil fuels. This study confirms that all new energy infrastructure must be sustainable from now on if we are to avoid locking in commitments to emissions that would lead to the world exceeding the goals of the Paris agreement.”

From the study abstract:


"if carbon-intensive infrastructure is phased out at the end of its design lifetime from the end of 2018, there is a 64% chance that peak global mean temperature rise remains below 1.5 °C. Delaying mitigation until 2030 considerably reduces the likelihood that 1.5 °C would be attainable even if the rate of fossil fuel retirement was accelerated.

"Although the challenges laid out by the Paris Agreement are daunting, we indicate 1.5 °C remains possible and is attainable with ambitious and immediate emission reduction across all sectors."

Justin Trudeau and most other Canadian politicians, federal and provincial, are on the wrong side of this. Their side is willing to gamble on the future of human civilization. It's not even conventional crude oil they want to pimp either. They're out to flood world markets with the filthiest, toxin-laden, high-carbon, ersatz petroleum sludge on the planet. That is the very definition of "pernicious."

They are disbanding apparently. Anyong

It disturbs me that these "fellow Canadians" really don't care about the clear consequences to others, now but especially over the next few decades, of what they want today. They would burn the place down for another paycheque or two and that, to me, is deplorable.

I noticed as reported in the Guardian that the report doesn't take into consideration the feedback loops that have been set in motion, Mound. If we include them, the time frame is even shorter, if indeed climate change can be contained at this point at all.

.. quite sure you've seen this Mound
but some of your readers possibly not

i found myself contemplating this same reality occuring.. but in all of our oceans.. and inland fresh water bodies, whether wetlands, streams, rivers, lakes.. which is of course what"s happening.. collapsing food chains, species extirpated


Hey, Sal. Yeah, I saw the item. Then I read the study or at least the abstract. Then I threw together a post on it incorporating a commentary on the fragility of the modes of organization that underlie societies, even civilizations, and how even insects are foundational to our food chains for other species and our own. I discussed theories of how societies collapse and the role of biodiversity in the continuation of our own.

Then, when I finished that piece I asked how much of this stuff a person can take in one day and, with that, I spiked it.

There are more and more days when it becomes nigh impossible to follow these reports and studies without getting overwhelmed. Reading them is essential to being able to connect the dots and see the emerging picture but it is not easy.

I understand how people turn away from it. What could be more natural? I've bookmarked 53 environmental websites, a half dozen of which I visit regularly. There is a mountain of information on the sites of various NGOs and government agencies that never makes the papers and I'm not sure that, on balance, that's a bad thing.

Last year we saw the emergence of a few climate scientists who recognized AGW as one element, one branch of a more complex problem. Overpopulation and over-consumption are interwoven with climate change. Now add natural feedback loops to the mix. We either find fixes for them all or we run a real chance of fixing none.

We're becoming like passengers on a lifeboat. We're trying to accommodate as much as we can.

There are too many of us eating too much meat the production of which results in overconsumption of energy and other resources and the production of intolerable greenhouse gas emissions. This is but one example.

We're now being told that we'll be switching to a new diet that will see insects introduced to the mix.

Ask yourself this. If we had stabilized the Earth's population at three billion instead of nearly eight billion heading for ten billion, would we be discussing an insect diet? That's an act of destitution.

If we had called a halt at three billion and focused on sustainability rather than perpetual exponential growth would we not, at the very least, have a far better opportunity at getting our GHG emissions under control?

To me, the scourge of the neoliberal era has been how we resorted to parlour tricks to swell per capita consumption (GDP) and population growth. We're still following that path and we've become pretty fond of cognitive dissonance to stay on this course.

Well...I now have a lung problem. It has happened due to the past three summers of breathing air from all the forest fires. That smoke just settled itself in Southern Alberta for days. There were times one could taste it. Reminded me of being in Qingdao, China in 2007. There now, they have cleaned up their air pollution quite significantly. While in Qingdao the air was terrible and one could not see down the road in 2007. Just a few days ago, I received a video from a cousin who has spend the last four years in Qingdao. I couldn't believe it...the Chinese are working at cleaning up non stop. It seems it takes a Communist Government to get things done....dare, dare, I write? It isn't difficult to understand what Neoliberalism is doing to our so called free world. We are so hampered in our democracy by government sources, we are willing to deny 15,000 climate change scientists. Anyong


Hi, Anyong. Out of concern about breathing wildfire smoke I installed an air purifier in my home last year. The difference was remarkable. I was reluctant to incur that cost but there's every indication that major wildfires will remain our new normal.

Your final point about denying climate science will be the subject of an upcoming post. I'll be looking at how fact has lost purchase both with our political caste and with the 60 per cent of our countrymen said to be so heavily in support of the bitumen pipelines that they consider it a "crisis."