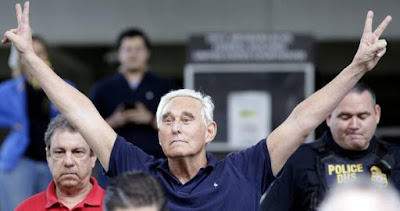 These are all political crimes and any prosecution of those crimes will reflect that.  So when dirty trickster Roger Stone says the prosecution is tainted, he's just blowing smoke up your arse.

It's not surprising that Stone made a gesture on the courthouse steps that we haven't seen for a while. 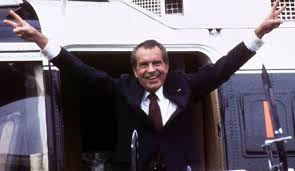 In case you don't know, Roger Stone idolizes Tricky Dicky. He even has Nixon's face tattooed on his back. 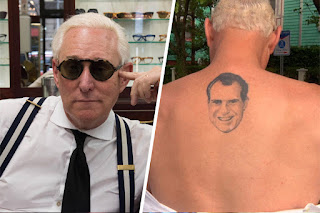 Stone left the courthouse in Fort Lauderdale to a crowd changing "lock him up, lock him up."

As much as I find Trump and his coterie of supporters despicable, part of me really liked the email leak.

It showed Hilary to be just as conniving as Trump. Those emails are proof that she is a fraud and hypocrite.


All this just underscores that the political class needs to be uprooted.

So when is the revolution?

LMFAO at the Russian troll.

BTW, if you watched Needy Amin cave on the wall speech in the rose garden today,

did you notice his obsession with duct taped women in the back of vans?

Somebody should check all the Drumph Tower basements for sex slaves.

There was nothing like that in the NBC clip I watched, Jay.

.. we buy oysters as boxes of 33 - mainly PEI malpeques, Mound
Imaging cracking the box open and seeing most of them 'smiling' back at you.. tap tap & they don't close ! Zero point to cracking more than one open. They're dead, going putrid or already dead & frightningly stinking. Toxic in fact

Stone just adds to the analogy. Just another Trump bedfellow needing disposal. Should we be grateful as North Americans thst Donald Trump has revealed the toxic box of poison that enables him? The Bannons, Stephen Millers, Huckabee Sanders, Its like the cardboard box of oysters was seeping pus, rotting, stinking.. you name it. At least Robert Mueller is systematically grinding along & delivering the real deal and as well, revealing how diseased the entire political world has become. Is this the 'upside of down' ? Can't wait to hear Don Jr taken down, Mitch McConnell properly demolished.. all the Russian dark money fueling these creeps.. Alex Jones, Hannity, you name it..

@AnnCoulter
Follow Follow @AnnCoulter
More
Good news for George Herbert Walker Bush: As of today, he is no longer the biggest wimp ever to serve as President of the United States.

Interesting stuff, Jay. Thanks for the link. Trust Ann Coulter to turn on Trump.

Sal, it's one giant bag of creeps.

Kurt Eichenwald picks up a little bombshell in the Stone Indictment,

Poor Jay - too blinkered to remember the outing of some very lucrative Wall Street speeches by Hilary.

Ah well. Hilary was a poor candidate that deserved her ost.
The dem establishment was anti-Bernie. Too bad.

Now we have the Orange Baboon as president. Blow back is indeed a bitch.


Ah, Jesus. Stop flogging this "Hillary" nonsense. At this point, that's living in the past, a cheap (and obvious) diversion. Enough of that crap.

Stone should have been given a super sized jar of Vaseline when he came out of the court. He's going to need it