Those Other Tipping Points That Go Unnoticed 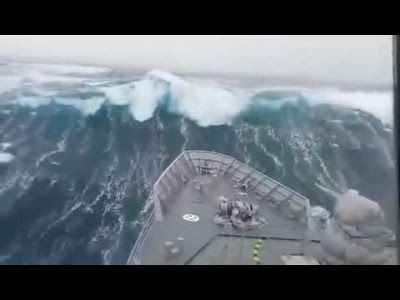 It's become customary in climate change reports to mention "tipping points." Anyone who has learned to handle a canoe knows there is a point at which the vessel lists far enough left or right that water begins to pour in over the gunwale at which point the canoe tends to go right over.  In the context of climate change, tipping points usually refer to natural feedback loops that take many forms including the loss of Arctic sea ice, the melting of ice caps and the retreat of the glaciers, the thawing and release of once safely sequestered CO2 and methane. The whole idea about holding man-made global warming to 2 degrees Celsius, 1.5C if possible, is to avoid triggering too many of these feedback loops that could lead to runaway global warming and utter catastrophe.

Rarely do we think of our oceans, that cover 70 per cent of the Earth's surface, in the context of tipping points.  Yet oceans are the repository for much man-made warming and man-made CO2. The oceans absorb half of our greenhouse gas emissions and 90 per cent of the heat they generate.  That leads to two changes - ocean acidification and ocean warming.

Ocean acidification is a tipping point we don't talk about in polite company. We know enough to deeply worry some scientists because the past few decades have taught us that climate changes are not linear. They can be abrupt and very fast in their onset triggering other changes (knock-on effects) that can catch us unprepared.

While ocean warming and the effects that may have on everything from sea level rise to ocean currents and circulation, ENSO (the el nino southern oscillation) and PDO (the Pacific decadal oscillation), the "Blob" of unduly warm water in the North Pacific are far better understood today than they were in the not distant past there's an enormous amount yet to learn.

Atmospheric temperature rise generally mirrors atmospheric greenhouse gas loading. Oceans, however, have a more complex warming pattern. Surface heat energy behaves much differently than the heat that reaches the deep ocean. What we've discovered in recent years is that a lot of the heat the oceans have been absorbing lately has gone to the deep ocean.

The reason global warming has been relatively tame over the past two decades, despite all the severe weather events of increasing frequency, intensity and duration, is because so much of the heating has gone into the ocean depths. It's not gone for good. The first law of thermodynamics, the law of conservation of energy, holds that energy can neither be created nor destroyed, merely transformed from one form to another. Put simply, that deep ocean "heat bomb" is waiting for a change in surface wind patterns to come back to the ocean surface and be released back into the atmosphere.

The oceans may be reaching a saturation point. Science has found that the oceans are losing their capacity to absorb atmospheric carbon and heat. They're getting full. That's physics.

A new report finds that, for the past 150 years, the heat energy from global warming absorbed by oceans has been the equivalent of 1.5 nuclear bombs per second. That's averaged out over the last 150 years.

“I try not to make this type of calculation, simply because I find it worrisome,” said Prof Laure Zanna, at the University of Oxford, who led the new research. “We usually try to compare the heating to [human] energy use, to make it less scary.”

She added: “But obviously, we are putting a lot of excess energy into the climate system and a lot of that ends up in the ocean,. There is no doubt.” The total heat taken up by the oceans over the past 150 years was about 1,000 times the annual energy use of the entire global population.

Humans, of course, are terrestrial creatures and it is only natural that we tend to see climate change in the context of its terrestrial impacts - tornadoes and hurricanes, sea level rise and coastal erosion/salination, heatwaves, droughts and floods. Yet our wellbeing, even in the most landlocked areas, is more dependent on the health of our oceans than most of us imagine. And so the oceanic tipping points go generally unnoticed and what's out of sight is indeed out of mind and off the political agenda.  Hell, we can't get past our squabbles over a penny ante carbon tax. As Professor Zanna remarks, it's "worrisome."

"Trudeau spoke to CBC's Daybreak Kamloops before the day's events, saying he expects jobs and the economy to be at the forefront of the discussions.

"That's one of first things we focused on as a government in terms of growing the economy and creating good jobs,"

“We moved forward on the LNG Canada project, which is the largest private sector investment in Canada’s history, $40-billion, which is going to produce Canadian LNG that will supplant coal in Asia as a power source and do much for the environment,” he (PM) said.

Can you believe, he actually said that? Good grief.

For such a relatively young prime minister, Justin has the focus of an old man. He's in thrall to the economy and perpetual exponential growth even as we're awash in evidence of far greater concerns on our doorstep.

Years ago I mocked Harper as a "fractional prime minister," referring to his obsession with some powers of government while simply neglecting other governmental responsibilities. I thought Justin would bring the federal government back into balance. He hasn't.

Instead of ponying up for a "penny-ante" carbon tax, Canadians should just set their money on fire. Because that's what Canadian oligarchs plan on doing to 3-trillion barrels of Alberta's finest!

Maybe you might feel all warm and tingly inside watching your money go up in flames. Doing the right thing. Fighting the good fight.

Global warming is hard science. The Anthropocene is occurring at hundreds of the times the rate at which enormous volcanic eruptions produced mass extinction events in the past.

But carbon taxation is certainly not a scientific solution. It's actually a Friedmanian free-market doctrine. (Which does have significant support among right-wing economists who believe it's a vehicle for lower corporate taxes.)

The ideology says, use taxation to send "market signals" which cause "free actors" in the global free-market place to adjust their behaviors. Then everything all works out. Except NOTHING these fake economists have EVER theorized has EVER worked out!

It's been one disaster after another since 1973! Every bridge they design falls into the river. And probably every bridge that collapses has a bunch of High Born moochers short-selling the goddamn thing!

Sure the world has descended into an Orwellian, Kafkaesque mash-up of Lord of the Flies. But how hard can it be to whip a few weasels and toddlers into shape?

The universe doesn't ask for much. But it looks like it's asking, one way or the other. Better get it up! This ain't no time for fooling!