If You're Huddled Inside Trying to Escape the Cold... 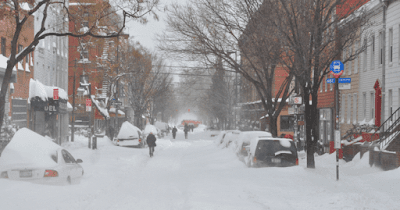 Most of Canada is in a deep freeze as the Polar Vortex sweeps down from the Arctic. It's cold. It's killer cold. It's also your new normal or at least the early-onset start of what will become your new normal.

My experience suggests that a lot of Canadians still don't understand the geophysics of what is happening to Earth and to them. Fortunately there are sites that explain it quite well including Inside Climate News. 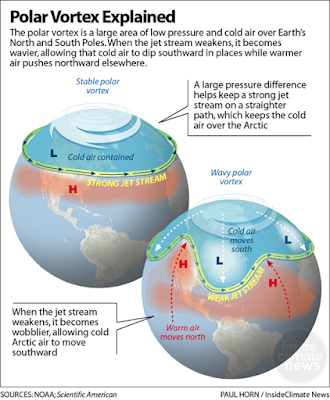 To over-simplify it, as the ice retreats from the Arctic it creates a warmer, more powerful atmosphere. That warmer Arctic atmosphere begins to push the polar jet stream off its west to east pattern into a more north to south flow. This brings really cold Arctic air further down into the south and warmer southern air north into the Arctic. These waves that alternately plunge north and south sometimes lose their west to east momentum. In summer they can stall over a region causing flooding in one place and drought in another.

Why does the Polar Vortex like to hammer most of Canada just not British Columbia?  Hey, back off. Some winters out here on the coast we get a snowy/snowish day, sometimes two, every year. Some winters.

Wriggling like a garden hose, each southward kink in the wind tends to be balanced out by a northward bend somewhere else. That can lead to the western states, even Alaska, being unusually warm and dry while the middle of the country and the eastern states freeze.


"We think it takes two ingredients to make this pattern so robust. A lot of warm water off the West Coast, and warm conditions and declining sea ice in the western Arctic around Alaska. Both pump a big ridge in the jet stream along the West Coast," she said. Then, a few thousand miles east, the jet stream dives south, bringing polar air to the East Coast.

In recent years we've been getting this offshore warming phenomenon commonly called "the Blob." That's the warm water off the coast that Dr. Francis is referring to. It seems the Blob is helping to pump a ridge of high pressure that sends the Polar Jet wobbling more north and south. It looks like this. 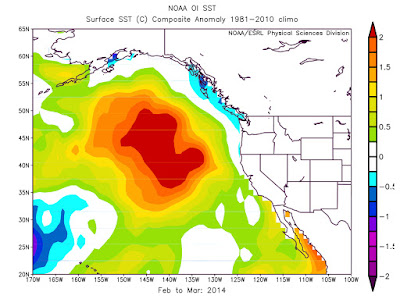 What causes the Blob is unclear. It comes and goes and we always seem surprised when it returns. It's a relatively new phenomenon. It's been claimed that it materialized in 2014. Before the science types could get a good handle on it, the Blob receded. Some thought it was gone for good. Then it came back and then it left again. Now it's back again. There's one theory that the Blob is caused by the warming Arctic atmosphere. Dr. Francis thinks the extra heat of the Blob, around 2 degrees Celsius, then pumps additional heat that sends the polar jet stream into its north to south pattern.  I'm guessing it's becoming our own "new normal."

We may not have all the answers but we know that this is real and, quite probably, something we'll see recurrently. The winter manifestation of this wobbly jet stream is bad but not nearly as destructive and deadly as the droughts and floods it brings over the rest of the year.

Meanwhile, if you are suffering, you're not alone. Britain is also getting a proper thrashing. It's the coldest day in the UK for seven years. 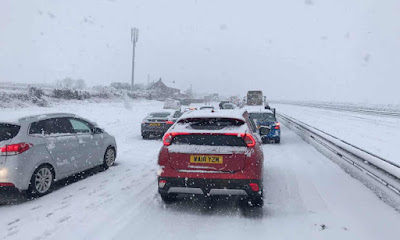 A few minutes ago I heard a CBC news item on this. It said global warming in the arctic causes the jet stream to become unstable, allowing the cold air to dip south more than usual.

The previous news item was that the Fed govt may have overpaid on the pipeline it recently purchased.


It's interesting how we can segue from one to the other without at least a bit of sardonic giggling.