Is This the Oceanic Time Bomb We've Been Warned About? 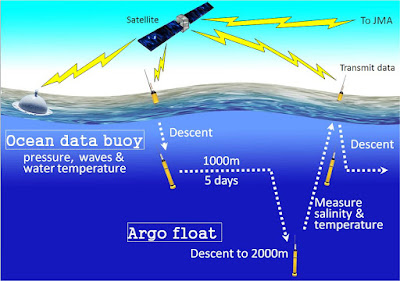 Even the Globe and CBC are now reporting that the world's oceans set an all-time heat record in 2018, sending marine life reeling and fleeing for colder waters. Fleeing for their survival.  Out here where I live we're seeing all manner of these climate change refugees. They cover the aquatic gamut - fish, marine mammals, and sea birds. Pelicans resident in Victoria, imagine.

2018 was a record. Guess when the previous record was set. You got it, 2017. And, par for the course, the results were worse than had been predicted by the unreliable Intergovernmental Panel on Climate Change, the IPCC.

“The deep ocean reflects the climate of the deep and uncertain past,” Kevin Trenberth, of the U.S. National Center for Atmospheric Research and a co-author of Thursday’s study, told Reuters.

Among effects, extra warmth can reduce oxygen in the oceans and damages coral reefs that are nurseries for fish, the scientists said.

Warmer ocean water also raises sea levels by melting ice, including around the edges of Antarctica and Greenland.

...New measurements, aided by an international network of 3,900 floats deployed in the oceans since 2000, showed more warming since 1971 than calculated by the latest UN assessment of climate change in 2013, they said.

And “observational records of ocean heat content show that ocean warming is accelerating,” the authors in China and the United States wrote in the journal Science of ocean waters down to a depth of 2,000 metres.


As I wrote on Wednesday, a massive amount of heat energy has been building in the ocean depths. This is heat energy, much of it from man-made greenhouse gas emissions, that the ocean absorbs. It's estimated that 90 per cent of the heat from global warming is stored in our oceans.  Scientists have been warning us for years that this heat energy at some point will be returned to the atmosphere triggering an abrupt spike in surface temperatures.

What an irony. We're charting record temperatures in our oceans across which our federal government, the Liberal government of Justin Trudeau, is determined to sail an armada of bitumen-laden supertankers hoping to flood world markets with toxin-laden, high-carbon fossil energy.  He won't be deterred, not by a mountain of scientific research and reports, not even by this ongoing marine migration that he could, if he chose, see with his own eyes.