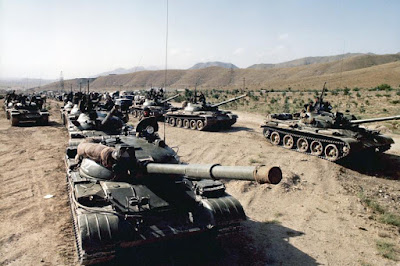 Why, with Trump, is it always the Russians?  His latest stunt - absolving the Russians/Soviets of any wrongdoing for staging a military intervention in Afghanistan in support of its then Communist regime.  From The Washington Post:

Afghan officials on Thursday denounced President Trump’s praise of the 1979 Soviet invasion and occupation of their country, which he described this week as a fight against terrorism, breaking with decades of Republican anti-communist tenets.

According to the revisionist historical account Trump delivered during a Cabinet meeting Wednesday, “the reason Russia was in Afghanistan was because terrorists were going into Russia.” He added: “They were right to be there. The problem is, it was a tough fight.”

The comments marked a surprising split with U.S. conservatives dating back to President Ronald Reagan, who saw the invasion as an attempt to spread communism and aided insurgent forces fighting Soviet troops.

The remarks also raised eyebrows among officials in Afghanistan at a time when Kabul has voiced frustration with Trump’s sudden announcement of a plan to withdraw up to half of U.S. troops as peace talks with Taliban insurgents continue without Afghan government involvement.

A statement from President Ashraf Ghani’s office described the battle against the Soviets as a “national uprising for gaining freedom” and noted that the Soviet invasion was condemned by the United Nations and the United States at the time.

“All presidents of America not only denounced this invasion but remained supporters of this holy jihad of the Afghans,” read the statement, which added that the government would be seeking clarity from the United States.

“Our war against the Soviets was righteous. The international community stood by us. We gave more than enough sacrifices,” Saleh told The Washington Post. “This man proves to be more mad than people think.”

...Sayed Ikramuddin Masoomi, a lawmaker representing Takhar province who also fought the Soviets, said their occupation “was crystal clear and was specifically for supporting [Moscow’s] puppet communists in Afghanistan.”

Trump’s invitation for Russia and India to join the fight against the Taliban — along with Pakistan, where the militants have enjoyed safe haven — further complicated matters, Masoomi told The Post.

Rahmatullah Nabil, a former head of the Afghan intelligence agency, blasted Trump in a string of tweets.

“Even Russia no longer says that or tries to justify it,” he said about the invasion and occupation. “Those that fail to learn from the lessons of history are doomed to repeat it; hopefully you are smart enough not to make the same mistake when it comes to abandoning [Afghanistan].”

So the most ignorant president in American history now thinks that Russia and India - plus Pakistan - should enter the war against the Taliban.  Trump displays a near total lack of understanding of the deep enmity and simmering conflict between Pakistan and India and how Afghanistan could become as dangerous as their standoff over Kashmir ever was.

As usual, there is someone cheering Trump's words - his pal, Vlad Putin.

Meanwhile, the Post's Jennifer Rubin confirms that, after two years in the Oval Office saddle, Trump is indeed more ignorant on foreign policy than ever.

The result of Trump’s inanities and the world view it represents will be more aggressive foes (both nation states and terrorist groups); the decline of friendly, liberal democracies as belligerent authoritarian regimes emerge; a world economic system dominated by China; a less dynamic American economy; the re-creation of ungovernable havens for terrorists (as was the case before 9/11); nuclear proliferation; and unabated climate change. It’s not a world any of us should want to live in.

"As usual, there is someone cheering Trump's words - his pal, Vlad Putin."

Crapping all over Putin by reflex is the "progressive" response from followers of the US overseas war party, the Democrats, neocon foreign country invaders to their very core. And proud maintainer of over 800 US bases overseas (they backed up Trump's defence budget and added $50 billion for good luck) trying to confine those darn Russkies to their borders behind which they conduct dangerous military exercises just like we do. You can't trust those Slavs, while I can't trust the Yanks and their propaganda and bombing machine, anymore than I also mistrust Trump and his go-it-alone illteracy, misogyny, phobias against non-whites and general "whats-in-it-for-me" approach. It's separate from the established order, but just as malicious, so now we have two parts of the US gung ho on subjugating "enemies". The US is the most frighteningly menacing country by far; has been since WW2. Ask Gough Whitlam's ghost.

You might read some Patrick Armstrong and consider some things that obviously conflict with your rather Pavlovian response, pro-US world view. Sorry, Armstrong's opinions weigh far more heavily with me than yours on foreign affairs, based as his is on some background knowledge in the biz rather than knee-jerk reflex squawking from the sidelines. I seek a bit of truth, and unthinking uninformed knee jerk opinions against Putin don't float my boat, when it's so one-sided.

On the environment, anti-Conservative Party stance, pointing out JT's and the Liberals limitations and revocation of promises, and Notley's transformation into a Blair Jr neoliberal with all the contradictions that implies, I agree with you.

However, I personally consider your blinkered approach to foreign affairs surprising since it shows little sign of the investigation your brilliant environment posts exhibit, and cannot understand why you would doggedly follow the standard Foggy Bottom State Dept and US privately-owned media line without question. Just so boringly conventional and incurious. Do you never question US establishment motives, or is it just Trump that raises goitres? Beyond my ken, I must say.


You might be right, BM. I don't follow Foggy Bottom, as you suggest, but lean more on past experience.

The Pavlovian business is insulting. Go fuck yourself.

My most lucrative years in practice were spent dealing with thieves and con artists. Have you spent much time in that field? You don't sound as though you have but I could be mistaken.

In any event, you have your opinion, I mine. I won't insult you for adopting someone else's contrary view.

.. not often I see a large serving of horseshit salad served up in a comment with a side order of insult .. but then I see it served as main course plus insult served daily by Donald Trump or one of his ludicrous proxies like Giuliani or Huckabee Sanders. Giuliani - a so called lawyer, can't even spell Mueller correctly (Meuller ?) which might be cause for some alarm within the White House flack corps. Huckabee Sanders of course will go down in history, ideally after explaining away Trump's bizarre & idioic revisionist history of The Soviet - Afghan conflicts. Your Anonymous commenter certainly might benefit equally by a brief topical review via Wipipedia.

The Donald is a salesman. His reframing of Afghanistan is founded on forging an alliance between India, Pakistan, Russia and the US to put pressure on the Taliban. Bring an end to the war.

Like Honest Abe reframed the American Revolution as the birthplace of American democracy. Which it really wasn't. But he turned this bit of revisionist history into his grand vision of government of, by and for the people.

The Donald is a great negotiator. Art of the Deal, baby! He brought Japan, South Korea and China together against North Korean's aggressions. He broke a lot of ground on nuclear non-proliferation after a string of Neville Chamberlains got strong-armed by the Kim dynasty.

Trump was right to kill the Iran deal. Why? There are three parties involved in the struggle in the region: Iran, Saudi Arabia and Israel. The latter two hated the deal. That makes it a bad deal. One that ends with Israel wiping Iran off the map. (Aka, The Six Minute War.)

Trump has better: A US-Russia-Israel-Saudi alliance to not only end the proxy wars that erupted across the Middle East and North Africa – with a lot of help from Bush, Obama, HRC and the military industrial complex – but bring geopolitical stability as well.

A Russia-China alliance is terrible for Russia and the West. It would create a world that could break along Axis and Allied lines. Then that's all she wrote!

Trump's solution to waves of economic migration? Bring living wages to Mexican autoworkers. Help the Mexican government rebuild its economy. This is the way Canada's economy was built post-war. Based on fair managed trade and social tariffs. (Back before Canada turned into a bitumen colony.)

The Donald is no hippy-dip revolutionary. He's ending the wars practically. He's also rechannelling that Deep State manic energy into fighting winnable wars against violent extremists and space exploration, militarization and industrialization. – Far better to level asteroids than mountain tops to get at minerals.

He also killed free-trade globalism, ending the process of Western nations shipping jobs, factories and GHG emissions out the door for a percentage. This paves the way for effective green tariffs to hit the polluters directly.

No one would say The Donald is perfect. But he's definitely getting the party started!