Terraform Mars, What Then? 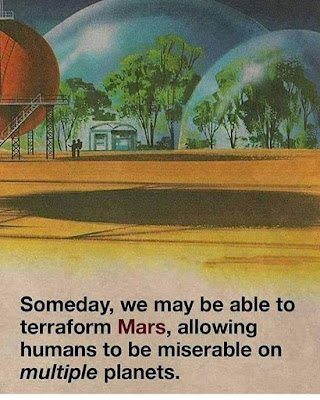 Ever wonder if you're a pessimist? I spotted this on the innerwebs the other day.

To hear Elon Musk tell it, he might even be among the first to emigrate to Mars within the next decade or so.  It's hard to think of Mars travel as emigration but, if you realize the odds of ever making it back to Earth are stacked against you, it's emigration.  You would become, for all intents and purposes, a Martian.

As I read the sardonic quip about being miserable on multiple planets I wondered what would happen if human beings did manage to terraform a planet like Mars?  How would the Martian population view the exploitation of their resources by Earthlings? How would they like taking orders from their distant relations 40 million miles removed?

Then the big question hit:  how long before Earth and Mars would be at war?  After all, isn't that what humans do? Since we figured out how to tie a rock to a stick, pillage and plunder is what we've always done. If the Martians wanted dominion over their planet, it's a safe bet we'd damn well make them fight for it.

Yeah, okay, I suppose I am a pessimist.
Posted by The Mound of Sound at 11:11 AM

Mars is freezing cold, has no air, no water, no ocean, no forest, no beer and no pizza. I'll stay here thanks.

Is there truly any difference between this and the rcmp in small letters on purpose deciding to ramp up a peaceful demonstration in B.C.?


Hugh, I would have asked nothing more from you, or myself, or anyone else.


I don't know, Bill. My FN contacts have told me there are some determined individuals quite prepared to turn this into another Ipperwash.

If Elon Musk migrated to Mars then, perhaps, we would all be happier?


I don't know, TB. Do you think he's not made a big contribution? He can be a juvenile jerk at times, but still...

I am an optimist. Given the conditions on Mars, the Martian population would be dependent on Earthlings for quite a while. If all the rich folks went there, it would be one of the rare occasions when I could support cuts in government funding. The world would be a better place, and they would be free from government regulation. Win-win.