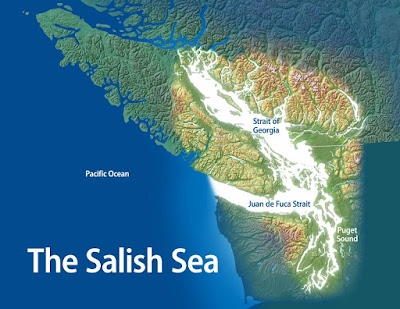 The question is how degraded has the Salish Sea already become from shipping traffic out of Canada's largest port, Vancouver. Indigenous groups from Canada and the US want hard answers before Trudeau even thinks about launching an armada of bitumen laden supertankers through those same waters

Indigenous groups in Canada and the United States are calling for a study of how human activity has degraded the waters off British Columbia's coast before any new vessel traffic is allowed in the area, where port and pipeline activities are on the rise.

Members of the Tsleil-Waututh Nation in B.C. and the Tulalip Tribes and Lummi Nation in Washington state say they want a halt to any more marine traffic in the Salish Sea until the impact study is complete.

"We're Coast Salish nations that have come together from both sides of the border with the United States and Canada to address this urgent issue that's happening to our Salish Sea," Raynell Morris of the Lummi Nation said Wednesday.

They say the proposed Trans Mountain pipeline expansion and a new shipping terminal at Roberts Bank, 35 kilometres south of Vancouver, would increase pressure on sea life.

The Federal Court of Appeal quashed the Trans Mountain project's approval in August in part due to the National Energy Board's failure to consider marine shipping impacts. 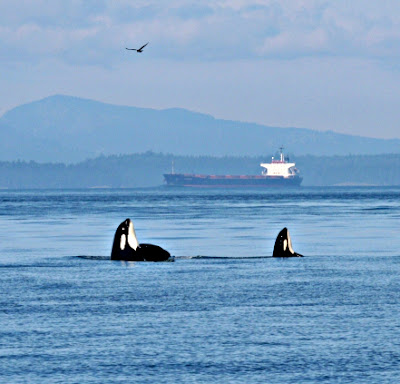 Rueben George of the Tsleil-Waututh said the decline of salmon stocks and, in turn, the endangered southern resident killer whales should be a wake up call to politicians on both sides of the border.

"To me it's like the canary in mines. The animals are going and it's happening and it's not going to be too long before it's affecting all of us," George said.

The groups said fisheries, sacred sites and traditional economies are all threatened by new and expanding port facilities and they want the study to consider change over time, not just the impacts of a single project.

.. aside from the incursion at Kitimaat.. of a natural gas terminus and liquefaction plant.. and port.. I am blown away by plans to pipeline natural gas from Dawson Creek, across & down British Columbia, burrow under the Salish Sea, reappear on Vancouver Island, bound for just south of Port Alberni.. and a new superport there.. More supertanker traffic inbound and outbound from the environs of Vancouver ? Oh sure.. If the pipedream of spewing all of Alberta and BC's hydrocarbon 'wealth' comes to fruition.. via Trudeau, he gets the mantle of the great westcoast Species exterminator .. His caucus already wrote off the southern resident Orca pod.. not deserving of 'emergency measures' as they are already toast.. and that's not arguable.. they have no Chinook wild salmon.. and the reasons why thensalmon are gone is well known to you.. they are gone like the boreal caribou ..

It is a mess, Sal. It's hard to spend any amount of time fishing or sailing on the Salish Sea not to develop a reverence for it. The indigenous groups have a deep cultural and historical connection that goes back to time immemorial. This sea is named for them.

It's bad enough that climate change is wreaking havoc on our coastal waters but enormously worse when that's compounded by reckless human initiatives. What ever happened to the precautionary principle, the established law of Canada?