What, the Toronto Sun? A Sun Columnist Says "a Pox on Both Their Houses." 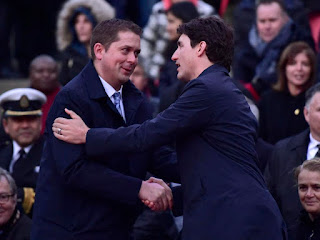 Toronto Sun columnist, Lorrie Goldstein, says, when it comes to climate change, Justin Trudeau and Andrew Scheer are on the same page. Both leaders, he says, are trying to blow smoke up Canadians' backsides.  Goldstein's take is that the only party leader being honest with Canadians is the Green Party's Elizabeth May.

“The other parties are immersed in conventional wisdom that wants to come up with election slogans that have to do with lying to people as effectively as possible,” May said in a speech last year, cited by the Toronto Star’s Susan Delacourt in a recent column.

Prime Minister Justin Trudeau and Environment Minister Catherine McKenna are misleading Canadians when they claim Trudeau’s national carbon price/tax and his other schemes have us on track to meet the commitments Trudeau made to reduce our emissions under the United Nations’ Paris climate accord he signed in 2015.

Conservative Leader Andrew Scheer misled Canadians when he said he could meet Canada’s Paris targets without a carbon tax.

Recently, he’s dropped this commitment, which is at least more honest than what the Liberals are claiming.

But until Scheer releases his plan, we don’t know how far he’s willing to go in telling the truth.


May is clear that, given that belief, she is committed to decarbonizing Canadian industry as rapidly as possible and transitioning to a clean energy economy, while keeping most of our reserves of oil, natural gas and coal in the ground.

While she would increase Canada’s capacity to refine its own oil, May opposes using pipelines to get it from Alberta’s oilsands to tidewater, and using oil tankers to deliver it to global markets.

...Unique among the mainstream party leaders, May says, honestly, that meeting Canada’s current emission reduction targets — much less the steeper ones advocated by the Greens — would require significant sacrifices from Canadians.

She compares it to the evacuation of Dunkirk during the Second World War when, as she put it, in humanity’s “darkest hour” ordinary citizens put aside their political differences and united to fight a common enemy that was, for that generation, another global, man-made threat to humanity.

May and the Greens would cancel all subsidies to the fossil fuel industry and institute a revenue neutral carbon pricing system called carbon fee and dividend, returning all money raised by a carbon tax to the public.

I think May’s plan is flawed because it underestimates the economic damage what she is proposing would do to a big, cold, sparsely populated, industrialized country with significant fossil fuel resources, like Canada.

But I respect that, unlike Trudeau, McKenna and Scheer, she isn’t blowing smoke up our behinds.

Of course this could all be a sinister plot by Goldstein to undermine Trudeau's cred with the climate change voter. It's pretty obvious that Scheer isn't seriously contending for that constituency. And chipping away potential Liberal supporters to the Greens might give aid and comfort to the trailing Tories.

However I carry no brief for the Liberals and certainly none for the Tories. I'm a committed Green voter, federally and provincially. From that perspective there's little to challenge in Goldstein's take on the two front-runners. Neither of them is to be trusted.

By my calculations, raising the carbon tax to $200/ton would increase the per liter cost of gasoline by 36 cents over what it is now. Meaning gasoline would cost about $1.60/L in BC.


Would that be a problem, Hugh? By making a concerted effort I have been able to curb my driving substantially. I realize that not everyone can do the same but I suspect that most could easily defray the additional cost of gasoline by smarter driving.

And if governments really committed to combating climate change, they'd buff up public transportation systems and fund development into battery technology which would take gas-powered cars off the road.