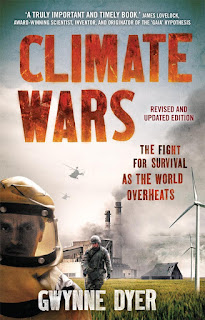 In his 2008 book, Climate Wars: The Fight for Survival as the World Overheats, author Gwynne Dyer wrote of a brutally militarized border between the United States and Mexico. This was not Dyer's imagination at work. It came from his considerable sources at the Pentagon where securing the US from a mass migration out of Central America was, and probably still is, a focal point of planning.  Sort of like those atrocities in WWII where a former enemy sometimes herded civilians into barns, churches, etc., set the buildings afire and then gunned down anyone who dared to flee.

Why would any advanced, modern democracy do that? It's complex.

We all have some awareness that climate change is real, it's here and it is beginning to affect our lives in various ways.  Some countries are just getting a taste of it while others are already reeling. As I've written several times, we'll all see this much more starkly in the coming decade, the 2020s. That's when we'll learn that what happens hundreds, even thousands of miles distant, will be felt here.

Camilo Mora leads a team of climate scientists at the University of Hawaii. In 2013 they released a paper predicting a new phenomenon, "climate departure," would set in starting in the early 2020s and spreading, region by region, to most of the populated parts of the world by 2047.

Climate departure isn't about conditions getting hotter. It is about the absence of cold years. It is a new climate in which every year after departure will be hotter than the hottest year before the shift.  No more cold years only steadily hot, extremely hot years. Mora phrased it rather eloquently: "The coldest year in the future will be warmer than the hottest year in the past."

Climate departure will be experienced differently in different regions.  The cooler your existing climate the easier it will be to endure. However if you're from a warm/hot climate, it promises to be hellish. Climate departure may devastate agriculture, make working in fields difficult even dangerous, and claim the lives of those that typically succumb in heat waves - the very young and the elderly.

Among the places identified as the first to experience climate departure are the Caribbean and Central America. That could be upon them in less than five years. What climate change is already inflicting on Central America is well chronicled. Crop failures have triggered famine. Nicaragua is the most recent country to urge its people to find sustenance from the local critters, iguana.  Unfortunately it's a stop-gap measure at best. Honduras promoted the iguana diet four or five years earlier. The locals have grown so fond of iguana and especially iguana eggs that the creatures are nearing extinction levels.

So if this is the plight of today's Central America, what will happen when climate departure hits? I suppose it's safe to say "nothing good."

Climate departure may bring ruin to Central America but what will it mean to the United States? Parts of the American south are sub-tropical:

Wikipedia provides a handy guide to the subtropical parts of the world which this map illustrates in yellow. As you can see that includes a good swathe of the southern US.

One feature common to subtropical regions is aridity in the form of deserts. That leaves them in a freshwater crunch. That's already a contentious issue across the southern states, Mexico, Spain, and Australia.

In 1950, Phoenix, Arizona supported a population of 106,000. Today it has to meet the water needs of more than 1.6 million. There's been similar growth patterns in cities across the southwest as Americans from northern states chose to retire in the snow free climes of the desert.  The seven states that comprise the Colorado River basin are squabbling over which should take how much of a hit to its water supply. To the east, there's an endless battle with Florida, Georgia and Alabama each suing the US Army Corps of Engineers, each complaining that the Corps isn't giving them their fair share of its limited freshwater supply, primarily the Everglades that is itself in danger of salination from sea level rise.

Absent water security and facing climate departure, the southern US may not be capable of accommodating a mass migration of climate refugees out of Central America. But where else can they go? The treacherous Darien Gap in southern Panama is impassable by rail or motor vehicle. No mass migration could transit its treacherous jungle.  It has been attempted by many trained adventurers. Many have tried, some have died. 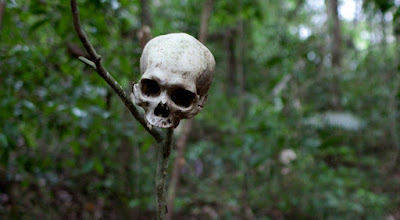 So, if there's no exit to the south, you have two options. You either die in place or you take whatever risks must be accepted to seek survival in the north. That reality is not lost on Pentagon planners.

Dyer writes of ideas to militarize the border up to and including robotic gun towers that will open fire on those who try to get in, hoping a few deaths will deter the many who might otherwise flood in. The nice thing is that no American has to pull a trigger to gun down defenceless Central Americans. The robots will handle the dirty work - out of sight/out of mind.

I thought of this today after stumbling across a report in The New York Times about a plan to deploy an additional 2,000 US troops to the Mexican border.


The acting defense secretary, Patrick Shanahan, told reporters that the United States would be sending “several thousand” additional troops to provide more support for the Department of Homeland Security’s border patrol efforts. Defense Department officials later said that they expect that number to be around 2,000.

That would come on top of the 2,400 troops who are there now, bringing the deployed number at the border close to the high of 5,900 that it reached in the weeks surrounding the midterm elections in November.

Most of us would like to imagine that this is a temporary measure to calm the fevered fantasies of the Mango Mussolini. What if it's not? What if it persists and the American people become inured to the notion of a militarized border?

A decade has passed since Dyer wrote "Climate Wars." The worsening conditions that he wrote Pentagon planners feared are coming to pass.  I expect we won't have to wait very long, a decade at the outside, for speculation to manifest as reality.

Anyone preferring to listen to the CBC Radio Ideas version can find it here: http://gwynnedyer.com/radio/

I've read my copy of the book at least twice and listened to the radio version several times. It is probably the most predictive of all the warnings about failure to confront global warming. I frequently wonder if Trump is simply posturing or if the US military is quietly egging him on. I do think that the wall will be built eventually.

As an aside, I predict that someday Antarctica will be desirable real estate. Of course, the ice and the penguins will be gone.


Toby, by the time the ice and the penguins of Antarctica are gone, so too will we.