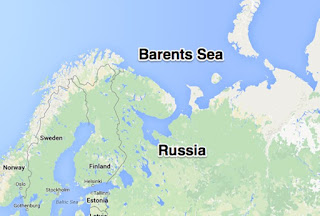 It's not so much a tipping point as a flipping point. The Barents Sea, a component of the Arctic Ocean much like the Beaufort Sea or the Chukchi Sea, is heating rapidly.


A rapid climate shift under way in the Barents Sea could spread to other Arctic regions, scientists warn.

The Barents Sea is said to be at a tipping point, changing from an Arctic climate to an Atlantic climate as the water gets warmer.

A conference in Norway heard that the Kara Sea and the Laptev Sea – both further to the east - are likely to become the new Arctic frontier.
The scientists warn that it will affect ecosystems.

The Arctic Ocean has a cold, fresh surface layer which acts as a cap on a layer of warm, saltier Atlantic water beneath.

But now in the Barents Sea there’s not enough freshwater-rich sea-ice flowing from the high Arctic to maintain the freshwater cap. And that’s allowing warm, salty Atlantic water to rise to the surface.

So it’s now only a matter of time, the researchers say, before this section of the Arctic effectively becomes part of the Atlantic. It could happen in as little as a decade, they warn.

Now you might be a Trudeau or Scheer acolyte or just a petro-state Canadian but these changes, that we can no longer stop but sure as hell can speed up, will have serious impacts on Canada and the world.  We've been warned, repeatedly, that we're out of time and our only hope of averting catastrophic climate change is to immediately slash our greenhouse gas emissions, meaning we have to put the brakes on our fossil fuel industries. Yet this year we will elect one of two jackasses who are bent on flooding world markets with the most toxic, highest-carbon ersatz petroleum on the planet.  Vote for Trudeau or Scheer, that's what you're endorsing.

You may know - isn't it also the Barents Sea where there is frozen methane, natural gas when warmed, that is in danger of burping gigatons into the atmosphere? It might be farther east, I cannot remember.

When that happens, just when we get enough natural gas to make oilmen positively giddy with glee, life ends.

“Vote for Trudeau or Scheer, that's what you're endorsing.”

As I have pointed out before, in my Riding the Choice is Con or Dipper. Any vote other than that is wasted.

@ BM,I seem to remember there was some talk of the Norwegians or Russians mining those seabed clathrates. They're definitely looking at the seabed oil reserves. Putin imagines endless wealth from Arctic oil. We shall see.


Define "wasted vote," Jay. If you vote for a candidate based on his/her party's platform and they win only to renege on those promises, isn't that a wasted vote? I don't consider voting Green any more a waste than voting strategically. Been there, done that. No more.

Voting for a cantidate/party that can’t win the riding, is wasted, like Green Party in 99.9% of the ridings.

You can see my solar panels and wind generator from the road, the Haughtons are 1 mile further up the road. We never see a Green. They don’t campaign any further out than 150 metres from the Pot Shop. The only people who bother to campaign up here are the Cons, and the Dippers, but it’s the “out side of town” votes that deliver the riding.

Any vote that doesn’t elect a cantidate, or defeat a cantidate, in our current system, is just virtue signalling that nobody knows about. As worthless as slapping a recycling sticker on your F-450.

At this present time, the Atlantic produces most of the oxygen we breath. Anyong