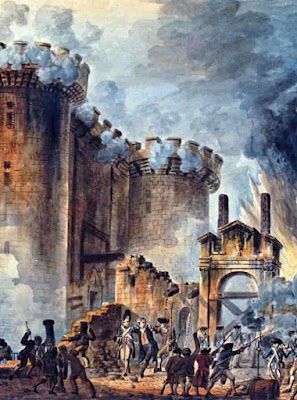 Even if the Democrats win the White House next month not much will change. Joe Biden, even if he had the energy and determination to crush the plutocracy and resurrect democracy, won't have the means to even America's political keel. The federal government isn't just in the pocket of Big Donors. The oligarchs own it.

It's the sort of predicament that invites gallows humour only, in this situation, it might be called "guillotine humour." That's certainly the take of Josh Brown, a.k.a. "the reformed broker," in a thoughtful piece, "Whatever comes after Trump and Biden will be worse."

He focuses on today's K-shaped economy, the burning fuse of social unrest.

What has developed is more like a K. On the upper arm of the K are well-educated and well-off people, businesses tied to the digital economy or supplying domestic necessities, and regions such as tech-forward Western cities. By and large, they are prospering.

On the bottom arm are lower-wage workers with fewer credentials, old-line businesses and regions tied to tourism and public gatherings. They can expect to bear years-long scars from the crisis.

I spent the summer listening to podcasts and reading books about the French Revolution. In particular, I recommend Hilary Mantel’s novel A Place of Greater Safety and Mike Duncan’s epic Revolutions podcast (Season 3).

The American Revolution began as a dispute between wealthy Americans and their colonial bosses. It was catalyzed by import taxes and business interests. It’s not at all apropos of the present situation in America. The French Revolution is a much better analog.

The French had tolerated Dukes and Dutchesses and all manner of feudalism and drastic wealth inequality for centuries. And then, like now, there was a natural disaster that blew up society and accelerated the already rampant inequities of their system into an intolerable extreme. There was a mini-ice age in the mid- to late-1700’s that froze the nation’s agricultural product, which led to a grain shortage, which then affected bread prices and threw the matter of sugar prices into dispute as well. Poor King Louis XVI just happened to have been coronated at the wrong time, 1775, just as the economic situation of the monarchy was being called into question with so many people starving on the streets of Paris. Newly won press freedoms made it so that any aggrieved citizen could start and distribute a newspaper (their version of Twitter) and these newspapers published the incendiary ravings of any lawyer, poet, philosopher or other opportunist who could string a few sentences together.

To counter these writings, the King’s finance minister had the idea to “open the books” and let everyone see that the royal family was managing the nation’s wealth responsibly. This was a Pandora’s Box, out of which escaped the very dangerous idea that the king was now answerable to the rabble. It wasn’t long after that heads began to roll. Then, like now, the cities were a sort of Ground Zero for the misery and suffering, and the revolt had to emanate outward into the countryside (our modern-day suburbs) in order to engulf the entire nation.

I don’t mean to suggest that we are quite at that point, but the parallels are lining up perfectly. We cannot endure a situation where the Hamptons carries on as though nothing has changed, tax rates remain where they are and asset price inflation becomes a substitute for wage growth. There is only so far that the top arm of a K can continue higher before something revolutionary sweeps up everyone on the bottom arm.

So if you think we’re polarized politically now, if nothing changes in the next few years we’re going to be unrecognizably so for the next cycle. And with the Boomer candidates having all aged out by then, whatever movement comes next is going to be angrier, more energetic and significantly less patient with the status quo.

Unless we find a way to re-employ and re-enfranchise the millions of people who have essentially fallen out of the economy, through no fault of their own. Unless we find a way to bind ourselves together again, as one workforce, one economic reality, and one vast opportunity set where everyone has a shot to pay their bills and pursue their dreams. Right now, this ain’t it. The K doesn’t end well.

I don't think a new president, no matter how well-intentioned, can heal such a deeply divided nation.  McConnell taught that to Obama. No president can reform America's "bought and paid for" Congress. They will never turn on the oligarchs, their personal benefactors.

Maybe the French were right. Maybe it's time to give The National Razor a try.

Don't forget what made North America filthy rich in the first place.
All the free labour from the slave trade including Canada while the whites sat on their bottoms doing nothing allow those people then and today to think they are and were above every one else. Anyong

Covid temporarily at least has made politics of the day a little more socially inclined.
That said many of all stripes have taken advantage of failing system.
My guess is that the covid emergency will end with the greedy bastards club having more money so study your old serfdom history to see where we are going.
https://www.youtube.com/watch?v=6ntPUq8K4wk
......

Biden and the Democrats are just s likely to look inwards when it comes to trade and 'America First"; we would see little change with a Democrat win.

Financial measures such as the stock market and house/home prices forever confuse me as they bare little relationship to the real world that we live in; perhaps they are substitutes for the average Joe or Jane receiving a decent inflationary interest rate in his or her savings account which now account for little?

I think that's simplistic, Anyong. Slavery was instrumental in the development of the plantation/cotton economy in the southern states. Canada did not have that.

Canada did allow slavery but it was primarily native tribes selling their captives to the French. Slavery was practiced by some first nations. The worst of Canada's sins was when, in the aftermath of the American revolution, our leaders, eager to encourage loyalist Americans to emigrate, allowed them to bring their slaves to Upper Canada. It was a dark but interesting chapter in Canadian history and it's poorly understood.

Thanks for the links, TB. That's my all-time favourite Python clip. Bitcoin? I've managed to stay clear of that but I have friends who haven't fared at all well with their investments.

The Economist article was, well, predictable. Globalization falters and we're all like those Python peasants. I suspect globalism will fail as much from environmental pressures as anything. Those enormously long supply chains are dependent on the stability of each nation in the chain and I'm not sure that will be assured much longer.

On a micro level consider the experience of Ford and its best-selling F-150 truck. A supplier of one critical component had a devastating fire. Ford had everything else it needed to build its trucks, just not that one component. There was no alternative supplier. The whole line had to shut down. Dealers couldn't get F-150 trucks. Some of those potential customers were lost to competitors.

Something like that may occur to disrupt these long supply chains mandated by globalism. Even Chinese manufacturers now source components from suppliers in lower-wage nations.

Perhaps a little history about Nova Scotia might Chang your mind.

Why would you assume I haven't explored the history of slavery, both trans-Atlantic and indigenous, in Canada, Anyong. Have you?

Here are a few links to get you started:

That should be enough to get you started. I began to look into this a few years ago because I found it a fascinating part of Canadian history. Upper Canada, from John Graves Simcoe, to the general population to the courts, were abolitionist which is why slavery was prohibited there long before the Brits abolished the institution.

When it is discussed at all these days the conversation is usually narrowed to trans-Atlantic slavery, the bringing of African slaves to Canada when the history of slavery in these lands predates by centuries the arrival of Europeans.

And the the “Spears” family one of many that benefited from free labour. “Free Labour” that made many families very wealthy to this day was all I wanted to bring to the attention of your readers...a little reminder of Canada’s role in Black problems that exist to this day. I definitely did not implicate that that you personally are uneducated in the case of Canada. Anyong