The Damage We're Inflicting on Our Young 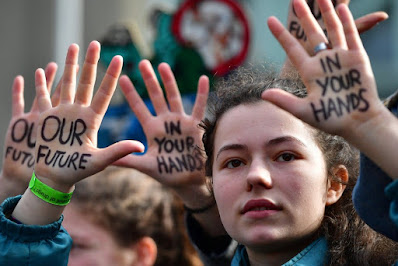 You might understand climate breakdown. It might cause you a measure of anxiety. But what you're experiencing is on a different plane to how young people are experiencing this threat.

The Lancet, Planetary Health has published a call to action to help young people who have had a peek at the terrible hand we are dealing to them.

Global youth-led climate strikes, federal lawsuits demanding government action to reduce greenhouse gas emissions, and advocacy by young climate activists such as Greta Thunberg and Isra Hirsi show that youth are anxious about their collective futures. In 2019, in March alone, an estimated 1·6 million school-aged protestors in 125 countries demanded action be taken to combat climate change. Direct effects of the climate crisis on youth are already apparent: the global concentration of atmospheric carbon dioxide is the highest it has been in 3 million years, sea levels are continuously rising, and global temperatures are the hottest ever recorded. To compensate, the lifetime carbon dioxide emissions (or carbon budget) of the average young person today will need to be eight times less than that of their grandparents to restrict global warming to 1·5°C, as the limit set out by the Intergovernmental Panel on Climate Change in 2018.
7
Youth might be more likely than adults to experience ill-effects associated with climate anxiety. They are at a crucial point in their physical and psychological development, when enhanced vulnerability to the effects of stress and everyday anxiety elevate their risk of developing depression, anxiety, and substance use disorders.
8
Additionally, chronic stress during youth might result in permanent alterations in brain structure and the emergence of psychopathologies later in life.
8
As such, the stress of a climate crisis during a crucial developmental period, coupled with an increased likelihood of encountering repeated stressors related to climate change throughout life,
2
will conceivably increase the incidence of mental illness over the life course. However, few attempts have been made to investigate the short-term and long-term effects of climate anxiety on the mental health of youth.

Mental health professionals, policy makers, and advocates need robust evidence to mitigate the effects of climate anxiety and stress on the short-term and long-term mental health of young people. There has never been such a large population of young people globally, nor do we anticipate any reversal of the impacts of climate change. Young people are agents of change, our future leaders, and most likely to succeed in improving planetary health. Thus, making investments to improve their mental health and wellbeing will provide dividends now and in the future.

It's the least we can do.