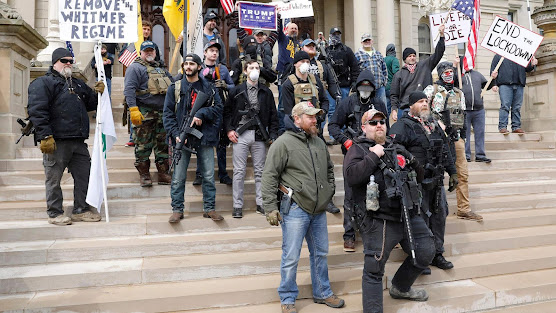 Six men associated with a right-wing militia have been charged with conspiring to kidnap Michigan governor, Gretchen Whitmer, and put her on trial for treason.

The six men had talked about taking Ms. Whitmer, a Democrat, hostage since at least the summer, according to a criminal complaint filed in federal court and unsealed on Thursday. They met over the summer for firearms training and combat drills and tried to make explosives; they also gathered several times to discuss the mission, including in the basement of a shop in Michigan that was accessible only through a “trap door” under a rug, the F.B.I. said.

The men had surveilled Ms. Whitmer’s vacation home in August and September, and they indicated that they wanted to take her hostage before the election in November, Richard J. Trask II, an F.B.I. special agent, said in the criminal complaint. In July, one of the men said the group should take Ms. Whitmer hostage and move her to a “secure location” in Wisconsin for a “trial,” Mr. Trask said.

...The F.B.I. believed the men were planning to buy explosives this week for their plot. Court records indicated that at least five of the men had been arrested on Wednesday in Ypsilanti, Mich.; it was not immediately clear if the sixth man had been taken into the custody.

The F.B.I. said it had learned about the group by intercepting encrypted messages and because it had undercover agents and confidential informants working with the group. The six men were charged with conspiracy to commit kidnapping, which can carry a life sentence.

...The authorities said that Mr. Fox and Mr. Croft had decided to “unite others” to “take violent action” against state governments that they thought were violating the Constitution and that Mr. Fox was the one to initiate contact with a Michigan-based militia group. The F.B.I. said he had talked of storming the Michigan statehouse with 200 men and trying Ms. Whitmer for treason. 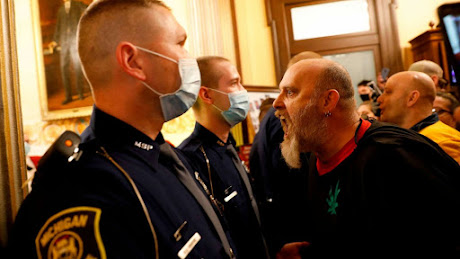 In April, thousands of people gathered at the State Capitol to protest the executive orders she issued shutting down most of the state to help stop the spread of the virus that has now infected more than 145,000 Michiganders and killed more than 7,000.

The protests featured some signs with swastikas, Confederate flags and language that advocated violence against Ms. Whitmer, including one man who carried a doll with brown hair hanging from a noose. Many in the crowd carried semiautomatic weapons, leading some Democrats in the Legislature to call for a ban on guns in the Capitol. 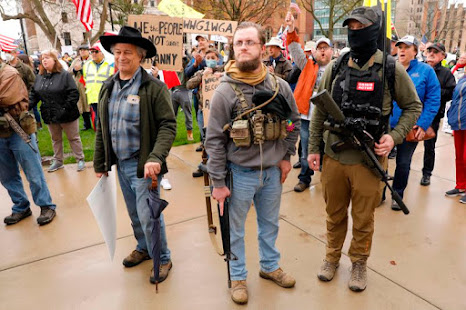 “Grab the f---ing Governor. Just grab the b---h,” one of the key suspects, Adam Fox, said in a recorded phone conversation on July 27, according to an affidavit obtained by the Daily News.

“Several members talked about murdering ‘tyrants’ or ‘taking’ a sitting governor,” the FBI wrote in the affidavit. “The group decided they needed to increase their numbers and encouraged each other to talk to their neighbors and spread their message.”

The FBI investigation began in March, when a militia member who later became a confidential informant reported being “concerned about the group’s plans to target and kill police officers," according to the agency.

Investigators also learned that the group had been meeting in remote areas of Michigan to engage in firearms training and tactical drill and once considered sending a bomb to the governor.

As for that bloated orange shitgibbon, Trump, he deserves to be impeached for inciting sedition.

Sedition is overt conduct, such as speech and organization, that tends toward insurrection against the established order. Sedition often includes subversion of a constitution and incitement of discontent toward, or resistance against, established authority. Sedition may include any commotion, though not aimed at direct and open violence against the laws. Seditious words in writing are seditious libel.

I don't think there's any question that Trump's incitement of America's violent radical right rises to "high crimes and misdemeanours." The House should bring articles of impeachment now, before the election, lest Trump lose and incite some insurgency or insurrection.

Michigan governor Whitman has also said that Trump is "complicit" in this plot.

It's refreshing to see that the FBI takes these home grown terrorists seriously.

Trump has been energizing these bastards, even as he smears Antifa as dangerous extremists. Don Jr. has been actively promoting the call to create an 'army' for the November election and its aftermath. It's hard to imagine a president fomenting outright sedition. DJT and Jr. should be behind bars.

Oh yeah, Toby. Does the guy in the bottom photo look a bit like Bubbles from Trailer Park Boys only with a beard?

Wow! Those Antifa guys are getting good at false flag operations. Bill Barr better get on this.

Oh, Cap, haven't you heard? There are fine people on both sides - well, maybe not the governor's side. She's a Democrat after all.

Makes me scared of those muslim terrorists.

Ain't that the truth, Rumley?

The US right wing radio host Lars Larsen was working overtime today trying to deflect this situation to a 'unknown ' group that was either left wing or right wing!! talk about deflection.
A week ago he defended the 'Proud Boys' as being a liberty caring group trying to counter Antifa .
That no one has located the Antifa leader or infiltrated it's,none existent website is driving the right wing media crazy!!

I’m waiting to hear if Billy Bob Barr will charge these characters with sedition as he threatened to do to those involved in BLM and other ‘lefty’ protests earlier this summer. Now he’s got what appears to be an open shut case involving the violent overthrow of a State government by a right wing militia group, aka “fine people”. What to do? Perhaps Donald “Liberate Michigan” Trump will have something to say about that. Mac

TB, the airwaves are a powerful thing in the Land that Truth Forgot.

Hey, Mac. Trump has spoken. Whitmer is a "terrible governor." Couple that with the fact that (a) she's a woman and (b) a Democrat and a kidnapping and worse plot was her doing. She brought it on herself.

It speaks volumes that, although the plot was detected and broken up by the FBI, the plotters are being prosecuted at the state level. Not a peep out of your "Billy Bob" Barr. I expect he'll ensure these terrorists receive mail-in ballots in their jail cells, maybe even a lovely floral gift basket with turkey pate and cranberry compote.

Groups such as the Proud boys are slowly but surely becoming mainstream.
We live in dangerous times.