The Confession of Donald J. Trump 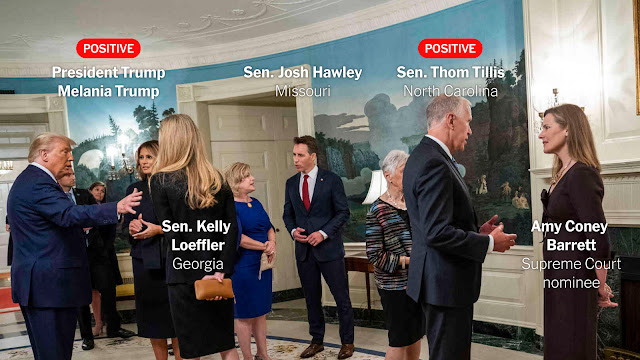 He didn't mean to confess. He'll deny he confessed, call it a lie, Fake News.

Donald Trump confessed yesterday in a tweet he sent from Walter Reed hospital where he's being treated for Covid-19.

"I learned a lot about Covid. I learned it by really going to school. This is the real school. This isn't a 'let's read a book school.' And I get it and I understand it."

Donald Trump has spent the past eight months surrounded by medical experts warning this self-absorbed man about the Covid-19 virus and the danger it posed to the American people. He set up a Covid-19 task force headed by his vice president, Mike Pence.

Even as 210,000 Americans died, Trump ignored the experts, often disagreeing with them, sometimes ridiculing them. He rejected social distancing, face masks, the lot at an endless succession of political rallies and other group gatherings. He ignored it aboard Air Force One. He dispensed with it at White House events, receptions.

The death of campaign supporter, Herman Cain, who sought to rally blacks to Trump, didn't matter. Trump rejected the suggestion that Cain contracted the virus by appearing, unmasked, in the midst of a crowd at the Tulsa rally. 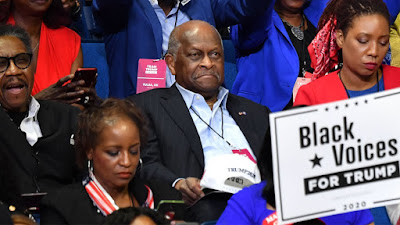 Even after Cain received his covid-19 diagnosis, he remained stalwart in his Trump-like opposition to wearing masks. When Governor Kristi Noem, of South Dakota, announced earlier this month that masks would not be required for those attending Trump’s recent Mount Rushmore visit, Cain tweeted his support from the hospital, in all caps: “PEOPLE ARE FED UP!” Block told me, “When covid hit, he was very careful about doing the things C.D.C. said. So I was a little surprised by the picture you saw of him in Tulsa without a mask on.” He added, “Maybe he made an exception that day.” He went on, “He’d done a lot of travelling that week, who knows where he got it.”

Trump, who yesterday said he now 'gets' Covid, he now understands it, revealed all he understands is how it affects him. He made that plain yesterday when he staged a cruise outside Walter Reed to wave at well-wishers just after he said he gets it.

What is clear amid all this defensive murkiness is that Trump’s dismissive attitude toward the virus became its accomplice, as his disdain for masks and perverse sense of invincibility translated into a packed calendar of events and blasé behavior by the people attending them that amounted to epidemiological suicide. 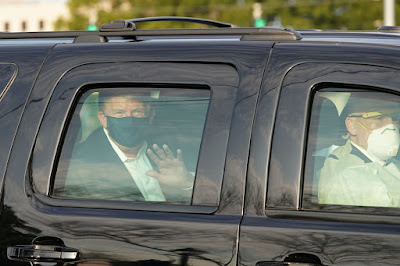 Illness isn’t illuminating him, not to judge by a stunt he pulled early Sunday evening, when he left Walter Reed National Military Medical Center briefly to ride past and wave at supporters outside. Although he wore a mask, “Every single person in the vehicle during that completely unnecessary Presidential ‘drive-by’ just now has to be quarantined for 14 days,” Dr. James P. Phillips, an attending physician at Walter Reed, wrote on Twitter. “They might get sick. They may die. For political theater. Commanded by Trump to put their lives at risk for theater. This is insanity.”

In his hospital video Trump also said he had met a lot of wonderful soldiers since he reached Walter Reed. What was it, some kind of Covid "meet and greet" with wounded soldiers?

Trump says he now understands Covid-19 yet he shows little evidence of his supposed epiphany. He is not changing. There will be no reformation. And Donald Trump's fingerprints will be on tens of thousands of corpses of Americans who never ought to have died.

Ol' Trump Prospero knew, somewhat, prior, according to Woodward. He just didn't care. He thought all the precautions the White House was taking was enough.

But like Poe wrote in "The Masque of the Red Death", arrogance did him in. He was caught up in the second wave like so many more (although the US' first wave has never really ended), because he thought himself completely safe from it. Caught up in his own propaganda, I suppose.

The amount of misinformation coming from the White House belies belief. It is as though it has become the culmination of Fox News with nothing but truthiness emerging from its outlets. Rely on it for the truth, and as Orwell, Bradbury, Atwood, et al. have forewarned us all, nothing would be truth any longer. Might as well believe 2 + 2 = 5 without any need to be tortured.

He'd do well for himself to stop whatever it is he's now trying to appear as, and just rest and recover. He's not out of the woods yet when it comes to this illness. Apparently, it can turn sideways right about this point.

He's spending precious energy propagandizing his health instead of saving it up for what call be the fight of his life if he relapses. Perhaps his treatment was enough—goodness knows not enough Americans had access to the same level of services he had (partly because of him to begin with)—but recovery from this virus is not always guaranteed until the virus is confirmed dead.

The thing is, the drugs he was fed need for a strong resilient immune system. His age and his girth and his diet may not provide for that.

Well, I don't wish for his death. It doesn't matter to me, because—as you're fond of quoting—from Bertolt Brecht: "Don't yet rejoice in his defeat, you men!/Although the world stood up and stopped the bastard,/The bitch that bore him is in heat again."

The Koch, Mercer, Walton, Bezos, Gates, Bloomberg money, and all the rest of those bastards are still out there, infecting the world even worse than Covid, making farce out of what once were the possibilities of republicanism. No matter one man's death, it doesn't matter until what made a Trump presidency possible is removed from this Earth wholly. Stamped and beaten down by a new populism that has no more worship much less regard for the rise of these sorts of Dickensian villains.

That's the outline for a terrific term paper, Troy - Trump as Shakespearean tragedy.

As for Trump I wouldn't mourn his passing. This is, after all, the monster who wrenched infants from their mothers' arms and consigned them to sleep on concrete in chain link dog kennels. For that alone I think the world would be much better off without him.