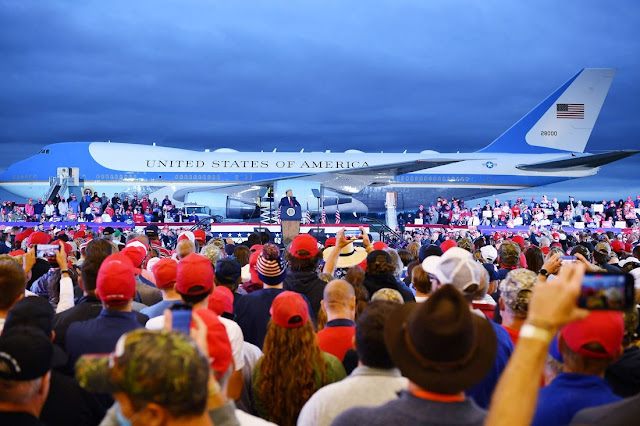 It's unclear how Trump, his missus and close aides mingle aboard Air Force One, the presidential incubation chamber, but it is a 747 which means it doesn't get anywhere at warp speed nor is there much room for social distancing, etc.

Trump, from what I've discovered, has quarters including a stateroom in the nose of the aircraft. While Melania sleeps, Trump stays up, watching Fox and summoning aides at all hours to his office to discuss things presidential or sports or just gossip.  The plebs, meanwhile, fend for themselves. Some bring yoga mats aboard to make sleeping on the carpeted floor a bit more comfortable. Apparently finding a dark, quiet place to nap is made more difficult because TVs are always on in cattle class and they're always tuned to Fox.

There's even a special place reserved for the press pool, in the back of the aircraft just aft of the toilets. Here's a pre-pandemic account of life aboard Trump's Air Force One for the fourth estate or, as Trump calls them, "the animals." 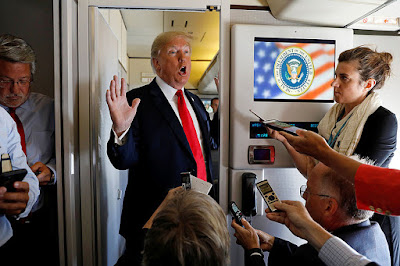 So what happens when one of the galley slaves comes aboard with an unwanted guest, Covid-19? Can they be screened out by testing? Not necessarily according to this July report from MIT:

The diagnostic test, known as a “PCR test,” works by detecting genetic material from SARS-CoV-2, the virus that causes COVID-19, in the nose and upper throat. A study that examined false-negative rates post-exposure, found that during the four days of infection prior to symptom onset, the probability of a false negative on the PCR test went from 100 percent on Day 1 to 67 percent on Day 4. And even on the day individuals began showing symptoms, the false negative rate was still 38 percent, dropping to 20 percent three days after symptom onset. Of course, much depends on the sensitivity of the particular test being used. MIT Medical is using a test that has been shown to have a false-negative rate of less than 5 percent five days post exposure.

On average, symptoms of the virus develop five to six days post exposure, but the incubation period can be as long as 14 days. And, of course some people never develop noticeable or debilitating symptoms — hence the recommendation to self-quarantine and self-monitor for a full two weeks after any likely exposure.

All of this is why we’re not recommending that people make decisions about their activities or contacts based on the results of a negative test shortly after possible exposure. For example, it’s not a good idea to fly into Boston on a crowded flight, get a COVID-19 diagnostic test within a day or two of arrival, and then, based on a negative result, visit your elderly grandparents. The only thing that negative test can tell you is that, at that particular moment in time, your sample did not show viral levels high enough to be reliably measured. It does not mean you were not exposed and infected during your travels. It does not mean you were not exposed and infected after your arrival. Do you want to visit your grandparents after flying into Boston? Self quarantine for 14 days first.

The impression I get is that there's really no safe way to eliminate the risk of transmission in the middle of a pandemic when you're spending a lot of time inside an aerial incubation tube. That's especially true when aides worry that wearing a face mask may be seen as a bit disloyal, an affront to the Orange Buddha.

A report came out today that found the longer a person was in proximity to an infectious person, the greater the viral loading they would receive and the greater chance of contracting the virus. An airplane ride of several hours is a questionable decision at the very least.

Trump's staff wouldn't be screened daily using PCR tests. First, no job is worth getting a swab jammed up your nose to the back of your throat everyday. Second, they're too slow. The test itself takes a lab six hours to run, then there's the transit time to send the sample to the lab and get the results back. Ontario's turnaround time is 24 to 48 hours in most cases.

Instead, the WH is reportedly using Abbott Lab's rapid test, which comes in a kit about the size of a toaster, doesn't use a deep swab and gives results on the spot in about 15 minutes. The drawback? According to an NYU study, the test missed half the positives picked up by a PCR test. So while the test will effectively screen out half of the people with Covid, the other half slip through. The deplorables, of course, will sneer, but masks, distancing and handwashing remain the most effective countermeasures.


I went through the ordeal of covering a federal election campaign - Canada, 1974. It was exhausting and it only got worse toward the end. That's when the leaders begin a full court press on ridings and regions where their advisers think an appearance might pay off. That's when the leader shows up in three different places in the course of one campaign day. That's a lot of hours logged sitting in an aluminium tube.

I was lucky. I got assigned to David Lewis. Unlike Stanfield and Trudeau, the NDP didn't have a jet. Their steed was a clapped out, ex-SAS Convair 220 leased from Sarnia-based Great Lakes (Shakes) Airways. You spent easily as many hours inside the tube as the other guys but most days you only managed one stop, two if they were lucky and there were a couple of days spent relaxing in some bar when the a/c threw an engine and a replacement had to be flown in.