Has Bill Barr Decided It's "Every Man for Himself"? 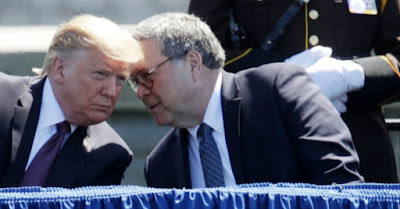 Bill Barr deserves no sympathy, none. As Attorney General, Trump's very own Renfield, has betrayed the American people, disgraced his office, damaged the Department of Justice over which he presides and routinely debased his integrity, to meet Trump's every command. Bill Barr is a loathsome man.

Yet Bill Barr might still cling to a survival instinct. He might not want to join the mad Captain Queeg and go down with Donald Trump's ship.

Bill Barr knows that, if Trump loses the presidency, he will have questions to answer. He will be held accountable for his decisions and he has much to account for. If the Democrats do prevail in just three weeks time it will not go well for Bill Barr.  Even within his own department there are many honing their knives.

Donald Trump wants, nay demands, that Barr now double down on what increasingly looks like a bad bet. Just as Trump attacked Barr's predecessor, Jeff Sessions, the Mango Mussolini is now blasting away at Barr. Why? Because Trump wants Barr to indict Democrats - Barack Obama and Joe Biden at the very least.

Maybe Barr is looking at the polls and calculating the consequences of doing something unforgivably boneheaded to appease a clearly demented guy who may be on his way out and has no loyalty to anyone except himself. Would you take those odds?