"The Arctic is Dying" 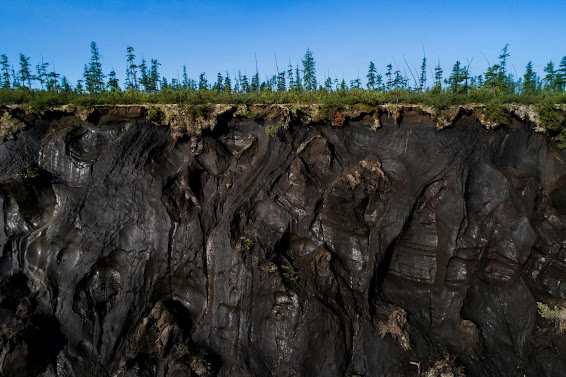 This photograph is the wall of Batagaika Crater in Siberia. It's the biggest permafrost crater in the world and it's still growing. All the once safely sequestered carbon is being released as the permafrost wall thaws.

"The Arctic is Dying." I first encountered that headline in an Agence France Presse  report on the return of the massive icebreaker/research ship Polarstern to its home base in Bremerhaven, Germany, concluding a 389 day mission, much of it spent drifting, trapped in Arctic sea ice. I wasn't sure if it was hyperbole. Then I read a similar account in Deutsche Welle and, again, in The Guardian. 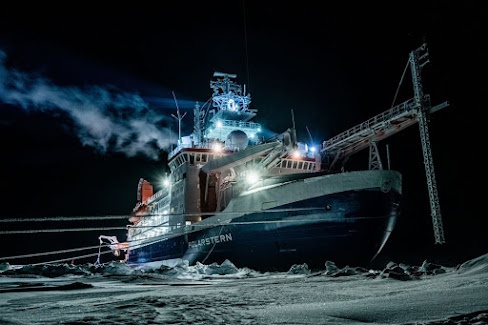 The team of several hundred scientists from 20 countries have seen for themselves the dramatic effects of global warming on ice in the region, considered "the epicentre of climate change", according to mission leader Markus Rex.

"We witnessed how the Arctic ocean is dying," Rex told AFP. "We saw this process right outside our windows, or when we walked on the brittle ice."

Underlining how much of the sea ice has melted away, Rex said the mission was able to sail through large patches of open water, "sometimes stretching as far as the horizon".

"At the North Pole itself, we found badly eroded, melted, thin and brittle ice."

"The expedition will, of course, produce results on many different levels," Rex said.

The team measured more than 100 parameters almost continuously throughout the year and are hoping the information will provide a "breakthrough in understanding the Arctic and climate system", he said.

Analysing the data will take up to two years, with the aim of developing models to help predict what heatwaves, heavy rains or storms could look like in 20, 50 or 100 years' time.

One thing is clear and inescapable. The Arctic, as it has existed for thousands of years, is over. We're only beginning to grasp the repercussions of that but, as climate change has shown repeatedly, it will be felt in various ways just about everywhere. The Guardian has a photo essay of what is already happening to the people of this remote region.

It's happening before our eyes. And we can't bring ourselves to do anything about it.

I know that I'm starting to feel like 'what's the point?' Owen. Yes, we may still be able to avert truly catastrophic climate change, the worst varieties. You would think we would recognize that opportunity and take it before it is lost. The best options we lost long ago. Why do we repeat those horrible mistakes? Every month that passes sees our window of opportunity close and the Herculean challenge of taking effective action become more arduous. Why do we let this happen?

My greatest regret is the failure of the Green Party to rise to the moment. Rarely in peacetime does an emergency so threatening appear. Elizabeth May gave it her all but worked within a political system unwilling to change. We have had but two parties govern and they rotate power every 10 years or so. We only have 10 years to cut our emissions by half. Instead of meeting that goal we get the "never never" nonsense about how we'll be carbon neutral by 2050. That's an empty promise that assumes somebody, someone down the road, will deal with this. Who, when, how?

The countries that are making real progress in cutting emissions all have one thing that Canada and the others don't. They have a plan. A plan that prescribes mandatory cuts of certain percentages by specified dates. A plan that binds future governments no matter their political stripe. We don't have that. Instead we've got empty promises and greenwash.

The Greens waste their time and ours trying to negotiate with these people. What has that got us? Next to nothing. Are we on the path to real change? Of course not. There is no time left for meaningless accommodation. The Greens are only deluding themselves that they're making a difference.

I see that photo of the shifting earth in Siberia, and I wonder about increased volcanic eruptions.

With mass shifting from land to the oceans from glacier loss, I would guess that also changes pressure. The oceans become "heavier" which forces magma to the land rather than venting out in the ocean.

There's an interesting term in the article linked above: climate whiplash. Increased temperatures lead to volcanic eruptions which lead to global cooling, but because there's so much fossil fuels in the atmosphere, global warming picks up again very quickly.

I'm familiar with the theory, Troy. There's also plenty of speculation that Yellowstone could produce a super-eruption that would devastate a thousand miles or more to the east.

Thanks for the link. It does seem plausible.