Fauci, "It Could Have Been Prevented" 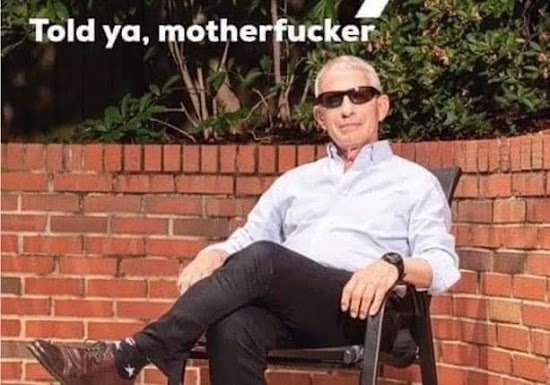 I think it's a safe bet that Anthony Fauci won't be on Donald Trump's Christmas card list this year.

Fauci, commenting on the recent wave of Covid-19 infections in the Trump White House, said "it could have been prevented."

During a virtual discussion hosted by American University’s Kennedy Political Union, Fauci was asked for his advice to students whose relatives have been reluctant to listen to public health experts. “That’s a tough one,” he acknowledged before suggesting that they “take a look at what happened this week at the White House” if they need concrete evidence that the virus is not a hoax.

“It’s an unfortunate situation when you see something like that, because that could have been prevented,” Fauci said.

Though he did not reference Trump directly, Fauci also said the pandemic had demonstrated the risks of “divisiveness and rancor and politicization” when it comes to communicating crucial public health messages.

It's hard to remain sane when so many around you are crazy.

Yes, Fauci is right, it could have been prevented. Unfortunately, there are other factors at work. Learning from others is not a strong suit for most of us. Much of human history has been the result of individuals and sometimes groups taking incredible risks motivated only by, "Let's see what will happen."


There is a madness afoot in the US, Owen. 40 per cent, possibly more, have developed a condition akin to mass psychosis.


I'm not sure, Toby, if the Republicans' predicament isn't the fault of the Congressional caucus declining to uphold the system of checks and balances, the notion of co-equal branches of government designed to restrain the excesses of a president just like Trump.