Why Michigan? It Was No Fluke. 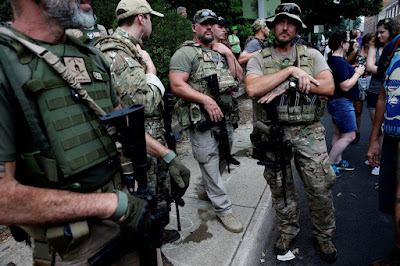 Why did heavily armed domestic terrorists storm Michigan's statehouse? Why did a group of terrorists, members of Michigan's Wolverine Militia, plot to kidnap and put on trial their governor, Gretchen Whitmer?

On the day that the FBI revealed it had broken up a conspiracy to kidnap governor Whitmer I spoke with a close friend in Grosse Point. I've known Bob for 50 years. He's a retired police officer with a PhD in criminology. He ventured the opinion that Michigan has the worst militia problem in the United States. Bob said militia territory begins where metropolitan Detroit ends and is widespread in the countryside beyond.

So, why Michigan? The story has its roots in the heyday of the Motor City and the creation of a Southern Diaspora of poor relatively uneducated blacks and whites from the Deep South who migrated to Detroit to get jobs in the car plants.

Henry Ford was big on hiring southern blacks until they started to get involved with the unions in the 40s. That's when he switched to southern whites. Ford, FoMoCo, was situated in Dearborn, one of the whitest communities in the region. From 1941 to 1978, Dearborn's mayor was Orville Hubbard, a committed segregationist.

"They can't get in here. We watch it. Every time we hear of a Negro moving—for instance, we had one last year—in a response quicker than to a fire. That's generally known. It's known among our own people and it's known among the Negroes here."  He also boasted that one of his tactics to discourage blacks who had just moved into Dearborn was by providing police and fire protection that was "a little too good"—wake-up visits every hour or so through the night in response to trouble calls.

Hubbard's other statements on race include the following:

I found some interesting photographs of Michigan's southern white diaspora at a website of the University of Washington. 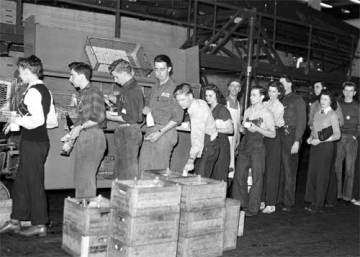 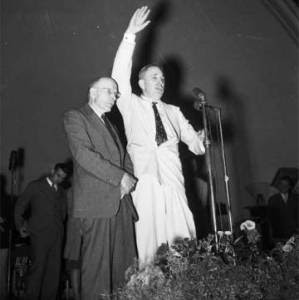 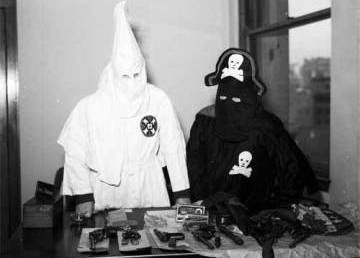 Detroit detectives show off confiscated robes, masks, and weapons belonging to the Black Legion. Before the Klan-linked organization was broken up in 1936, members had committed a string of murders and assaults in Ohio, Indiana, and Michigan. Newspaper reports claimed that most of the members were former southerners. (Walter P. Reuther Library, Wayne State University) 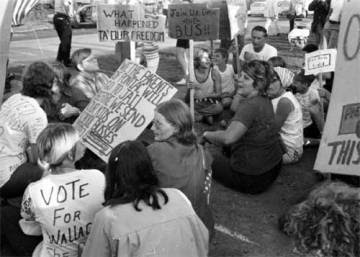 I suppose Bob is right. The white trash problem has been imbedded in Michigan since the 40s. My friend, perhaps uncharitably, figures they're inbred. He said you only need to go back and look at the photos of the occupation of the Michigan statehouse. 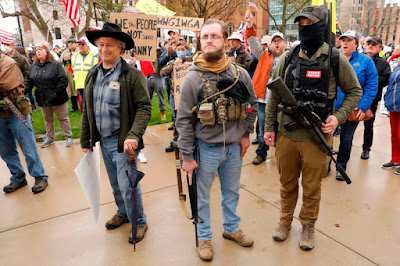 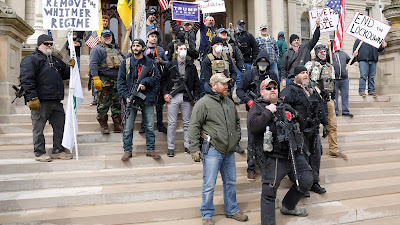 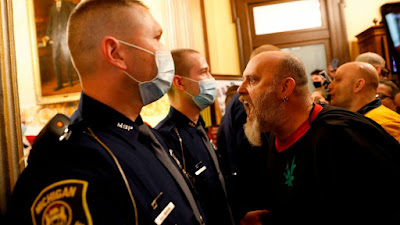 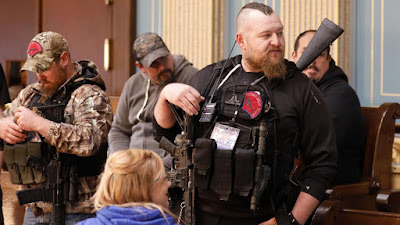 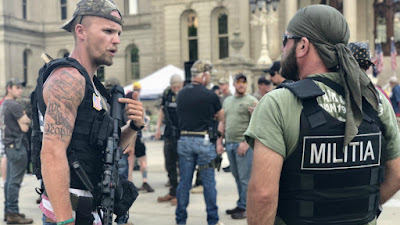 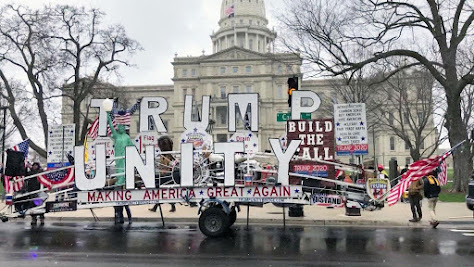 Yeah, I see what he means. Funny what can lurk, completely unnoticed, right below your nose.

Great background perspective - thank you!
Some questions arise about Ford in particular. He's a known anti-semite and there's evidence that he went out of his way to supply Hitler during his early days of militarization of Germany.

Ford and General Motors (a shareholder in Junkers) had sketchy dealings in WWII. "Trading with the enemy" is only an offence when little people do it.

Guys like you throw around the word white trash but you'd be the first one to lock your doors and roll up the windows if God forbid you had to pass through Detroit.

Try living in the inner city for a month or two, would probably change your perspective a bit instead of preaching from your ivory tower in 99% white Vancouver Island.

My guess is you'd prefer birdwatching to daily murders and gangland violence.

"Guys like you" Like what, arsehole? I've passed through Detroit hundreds of times. I did my undergrad in Michigan in the early 70s. 1970s Detroit, pal. I had an aunt, a nurse, and a cousin who lived there. I had friends there. My very best friend, the cop I mentioned, born and raised. I commuted daily across the border, in the fall and spring on my BSA motorcycle and, yes, when I couldn't get away from school early, there were a good many nights when I rode through some pretty miserable neighbourhoods, the only white boy in the vicinity.

I use the term "white trash" advisedly to distinguish their breed, i.e. the slack jawed thugs who stormed the statehouse, from decent, white Americans of which there are many. You would do well to read Louisiana U prof, Nancy Isenberg's "White Trash" that traces their (your?) 400 year history in the United States. See how nice I am? I even gave you a helpful book reference. You can thank me later.

Imagine if a Christian wrote a book called Jewish Trash.

I wonder how well that would go over...

Oh, I get it. You're not just a white supremist, you're anti-Semitic to boot. Isenberg = Jew = enemy of white trash. And you deduced all of that without ever cracking her book. Do you want to demonstrate your stupidity or is it something over which you have no control?

Unlike you, I have read the book. It's well researched, well documented and very insightful. She doesn't slag "white trash." Instead she chronicles how they began, how they were created by an entirely superior class of whites that included your Founding Fathers, how they were repeatedly displaced by powerful, wealthy whites who used them to push back the natives to seize and clear their lands. It was rich whites who repeatedly drove the white trash (they actually used far more disgusting names for them) off their lands until they settled in outback areas the gentry didn't want. Talk about Christian charity. Centuries of it.

As for Christians calling Jews trash, you really need to take a few history classes. Jews didn't just have to endure books written about them. They were routinely slaughtered en masse. Read about the pogroms in Russia, in Poland and elsewhere. Read about England where, for the better part of four centuries, it was a capital offence for a Jew to be found in the kingdom. Then there was also that business with Hitler. I expect you may have heard of that.

As for your previous remarks about Detroit, I am familiar with I-75, I-96, Jefferson, Woodward, Grand Boulevard, Gratiot, 8 Mile, John R. and Brush street. I last rode through Detroit less than 10 years ago astride my current bike, a BMW, going straight downtown only to find the tunnel no longer permits motorcycles whereupon I had to cross via the Ambassador Bridge. Back in the day I could navigate fairly easily not only through Detroit and Grosse Point, but also Ann Arbor, Lansing and Port Huron but my favourite spot was Frankenmuth.

So please, spare me the "white power" bullshit. Put down your AR, go to the public library and educate yourself. You really could use it.

I still laugh at photo #4.
Pointy hats and pirate costumes!
Why has the symbolism of these people never been ridiculed?
Perhaps the same goes for the KKK version 2.1 with their shaven hair camouflaged clothing, which stands out in sea of denim, the pity goes on.
Sadly the world has accepted this a a norm!
Progressives cannot get off scot free for it is the demand for freedom of speech that has brought us to this point.
We will not have democracy until we rid ourselves of first past the post winners of elections.

TB, I'll have to delve more deeply into the 1st amendment to respond to your accusation against progressives. When I had my own firm we had to research free speech under the Charter in the context of free speech under the American constitution. It was through that exercise I learned that what we consider free political speech actually began as an effort to safeguard free commercial speech. The freedom to tout or mislead in the pursuit of commerce and trade. It's all very convoluted.

I learned that what we consider free political speech actually began as an effort to safeguard free commercial speech. The freedom to tout or mislead in the pursuit of commerce and trade. It's all very convoluted.

I look forward to you response.

Is there not a danger of comparing Republican politics to to British parliamentary system?
I am no lawyer; fire away.