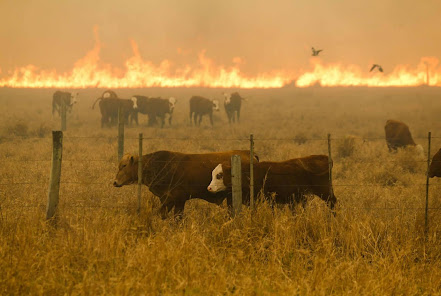 North Americans are all too well aware of our wildfire crisis as, every year, vast swathes of forest are consumed by fires that spread so fast they seem almost diabolical. It is becoming so hot and so dry fires that once spread through ground fuel - fallen branches, leaves, needles - now spread through the tree tops in explosive fires that leap from tree to tree.

South America also has a forest fire problem, particularly across Argentina, Brazil, Paraguay and Bolivia. Only these fires are deliberately set to clear land for grazing and crop production.

In Argentina, half of the country’s 23 provinces are enduring the worst fires in decades, causing sore eyes and breathing difficulties in a number of smoke-invaded cities, while destroying wildlife – from endangered monkeys to jaguars, as well as birds and reptiles. Parts of its heavily deforested northern Gran Chaco are burning, as are the country’s eastern Paraná Delta wetlands, where fires skip from one cattle-grazing island to the next, forming gigantic walls of flame.

In Paraguay a national emergency was declared on 1 October as more than 12,000 outbreaks were recorded and the capital, Asunción, choked on dense smoke. Wildfires in the Paraguayan Gran Chaco forest have been so extensive that last weekend’s newspapers ran front-page stories with such headlines as “Paraguay burns”, “In between flames” and “Help! Somebody help us”.

Omar Cabanellas, mayor of the Chaco town of General Bruguez, says a local man died in “totally uncontrollable” fires that affected nearly 600 square miles. “It completely overwhelmed us,” he says. “There were dead wild animals everywhere. The ranches are totally burnt.”

The fires are also rampant in Bolivia, the land-locked nation next to Brazil, Argentina and Paraguay, home to extensive areas of the Amazon and Gran Chaco forests. On 16 September, Bolivia declared a state of emergency because of widespread fires, fanned by strong winds and temperatures above 45C. Government estimates the loss up to September 2020 at about 2,400 square miles.

Fires in Brazil’s Amazon are the worst in a decade, satellite data has shown, driven by high levels of deforestation, mostly to make way for cattle pasture and soy plantations, two commodities that have grown in value during the pandemic. As much as 40% of the Brazilian Amazon is nearing the tipping point of turning from forest into savannah. Further south, more than a quarter of the Pantanal, the world’s largest tropical wetlands, has been on fire this year, a combination of arson and drought driven by the climate crisis.

We've seen this before in southeast Asia when choking smoke blanketed east Asia from  Singapore to Korea due to fires across Indonesia from stem to stern set to clear ancient hardwood jungle forests to make way for palm oil plantations. That has gone on for years. It's a savage, immensely destructive practice to extract maximum short-term gain with terrible long-term consequences.


As much as 40% of the Brazilian Amazon is nearing the tipping point of turning from forest into savannah...

As if they care!
Bullshit baffles brains and handouts Trump commonsense the world has been bought, as Carlin said they own us.

In a world where the majority think of the immediate future and not long term I have to wonder what democracy is all about?


Bolsonaro has done real and lasting damage to Brazil, TB. Like all authoritarians he uses ideology as a substitute for vision and the outcomes are so predictable.

In much of the third world, countless small fires burn vegetation and garbage (incl. plastics) on a daily basis contributing the the ABCs over most cities and much of the countryside. (Atmospheric Brown Clouds)

Fire is used seasonally to clear the fields for next years crops. (Visit N. Thailand in April where the smog/smoke is thicker than Bangkok for weeks)

Then add to this standard mix, your old growth clearing for palm oil (in S. America too for grazing animals) and voila ....

I sometimes wonder if we're too lazy, greedy or weak to save ourselves, NPoV.

BTW, I hope you have a good Thanksgiving.