Many of us are experiencing some measure of apprehension about what awaits the United States in the run-up to the November 3 election and in the aftermath. Where is Hunter S. Thompson now that we need him to guide us through this unfolding derangement? Who could have captured this moment better than HST?

Oh it'll all work out for the best, I'm sure. The Americans will elect a new president, a new Congress, and life will return to some sort of normalcy.  The country won't go all to hell.

Maybe it will go all to hell. Maybe it's gone too far already.

Remember Kyle Rittenhouse, the little shit who gunned down three protesters (two dead/one wounded) on the streets of Kenosha, Wisconsin on August 25th? He's surfacing again as a martyr to America's virulent right-wing. 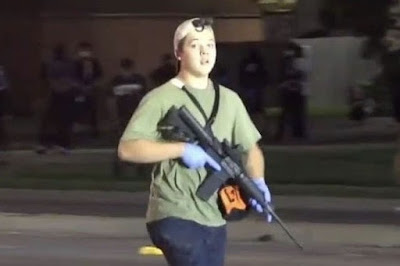 That he traveled from his Illinois home to Wisconsin with mayhem in mind was obvious to me in what I wrote at the time:

Take a look at the photo. There's plenty of photos and video of Rittenhouse. He maintains he was just there as a vigilante, to prevent the mob from sacking shops and such. He didn't go there to shoot anybody. Except that was very much on his mind. Look at his hands, the rubber gloves. There are two reasons for wearing disposable gloves. One, to ensure you leave no fingerprints on the weapon. Two, to prevent getting telltale gunpowder residue on your hands when you do fire.  Those gloves are evidence of premeditation, "malice aforethought." He anticipated that he might need to cover his tracks, to eliminate damning evidence that could be used to prosecute him.

“Kyle was a Minuteman protecting his community when the government would not,” one of his attorneys, John Pierce, tweeted in late August a few days after the protest, which was sparked by the police shooting of Jacob Blake. In another tweet that has since been deleted, Pierce added that Rittenhouse, who went to the protest to prevent looting, would “go down in American history alongside that brave unknown patriot at Lexington Green who fired ‘The Shot Heard Round the World’ on April 19, 1775.”

“A second American Revolution against Tyranny has begun,” Pierce wrote.

...Are violent undertones and a belief in God’s support filtering into the attorneys’ work? “In next 3 months, people will realize that God is real & only He can save us. His will SHALL be done on Earth as it is in Heaven,” Wood tweeted on August 29, a few days after Rittenhouse shot the protesters. Pierce retweeted him. Hours later, Wood added, and Pierce retweeted, that “America is now engaged in its second civil war. It will get worse before it gets better.” 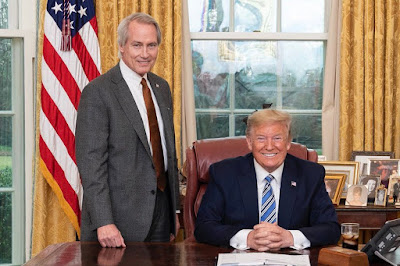 As the presidential election draws closer, both attorneys have taken to social media to warn of an impending battle. On September 5, Wood (shown above) went on Twitter and shared an article published by a conservative think tank, the Claremont Institute, that posits that “Democrats and their ruling class masters [are] openly talking about staging a coup.” “Don’t be fooled,” Wood tweeted to his tens of thousands of followers. “It’s coming.”

The article, written by Claremont Institute fellow Michael Anton, a former national security official in the Trump administration, cites several justifications for the conspiracy theory that liberals are planning to violently seize the White House. For starters, Anton writes, Defense Secretary Mark Esper said earlier this year that he didn’t think Trump should invoke the Insurrection Act, a law that would allow the president to deploy active-duty troops to protests around the country. To Anton, this was a sign that military leaders were ready and willing to flout presidential orders.

...Wood appears to have a history of promoting conspiracy theories. According to the lawsuit by his former colleagues, he told them he feared that if they blew the whistle on his unprofessional behavior toward them it would interfere with “his imminent receipt of the Presidential Medal of Freedom and appointment as Chief Justice of United States Supreme Court.” In the lawsuit, they said he believed he was slated to join the high court because of “(1) a decade-plus old ‘prophecy’ [he] heard in a YouTube video, and (2) a conspiracy theory that Chief Justice Roberts would be revealed to be part of Jeffrey Epstein’s sex trafficking ring and was being blackmailed by liberals to rule in their favor.”

On Twitter, Wood has also stated views about the coronavirus that run counter to science. “If God thought we needed masks, he would have included them in original design,” he wrote in late August. He has also said that if he became infected he would take hydroxychloroquine, an anti-malarial drug that Trump has touted despite a lack of evidence that it’s effective against the coronavirus.

...Wood’s rhetoric becomes especially apocalyptic when he talks about politics. In another tweet, he wrote, “Democrats are not trying to win election. Biden has dementia & Harris is unqualified. They seek to steal Presidency by cheating with mail-in ballots. Under cover of planned violence, they intend to overthrow Constitution & seize power.”

Rittenhouse may not have planned to become a cause célèbre in this fight between the left and right, but his attorneys appear to be making him out as one. “Kyle Rittenhouse should be freed immediately and the charges should be dropped,” Pierce tweeted. “He was protecting his community where his government failed, and defended himself. God gave him that right, and no prosecutor will be allowed to take it away. Ever.”

Meanwhile, NBC News contends that Trump and the GOP have latched onto Kyle Rittenhouse in a "last ditch 2020 voter strategy."

I don't know, Mound, these attorneys sound like monkeys flinging feces. That may keep the MAGAts pumped, but it's unlikely to cut much ice in court where theories require evidence and judges, not to mention opposing counsel, take a dim view of BS and grandstanding.

As for Kyle being a Minuteman protecting his community, well, I don't think many Minutemen got their moms to drive them to another state to gun down peaceful protestors. Seems far fetched to me.

A lot of what drives Trump's base is far fetched.

.. Deary me.. I had no idea that punkass murderous scum was Paul Revere all over again.. My bet is the charges get washed down out of sheer weariness.. and the killer ends up serving 'house arrest' with mom n dad for a year or two.. but has keys to the family car.. Its the new American Way.. a ground hog or Norwegian Rat .. in every pot and eat poke salad.. until he sells his best seller.. just like the punk ass who sneered at the one old man who stood up to him and all his bully group.. that sneering little Ahole went on to litigious fame and glory

Trump could give him a pardon followed by a Colt endorsement .


Sal, I have long wondered at how America's social collapse ends - and it must somehow end and soon. Lincoln warned that "a house divided against itself cannot stand" and that's the state of the union, again, at the moment.

Well, TB, Trump does have a taste for the pernicious so it's hard to fathom what he might do if he's forced out.