Afghanistan - Getting Under Everyone's Skin 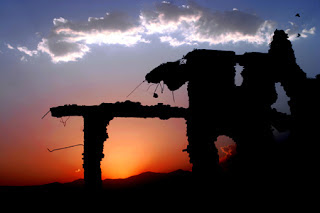 Western policitians pretty much fall into one of two camps today: those who are relieved they kept their nation's forces out of Afghanistan and those who wish they had.

When career bureaucrat, US Defence Secretary Robert Gates lashed out at NATO this week for not being properly trained for the counterinsurgency role it was a sign of frustration, even exasperation.

The Liberal leader Stephane Dion returned to Canada with a muddled idea, depending on how you interpret his words, that NATO forces should assist Pakistan in the tribal lands although he was vague to the point of meaningless about what that meant. His words naturally set off a wave of controversy.

Maybe Afghanistan has reached the critical mass achieved in Iraq that led US military commanders to bemoan that there were no options, merely varying degrees of bad options. I suspect they all see the same thing but can't bring themselves to say it - we're losing.

The Dutch, who were supposed to conclude their combat assignment this year, have extended to 2010 to save face. We've already extended once, to 2009, but now confront the awful reality that we might have to bear the blame for pulling the plug on the NATO mission if we actually go.

Gates, of course, is saddled with the incompetence and irresponsibility bequeathed to him by his predecessor Rumsfeld and the delusional adventures of Bush/Cheney. He only has to juggle his way through the remaining year but there's still a great risk that "the mission" will come undone before he can make his getaway.

NATO faces a make or break moment when the next summit is held in Bucharest this April. If NATO is going to back the Afghan mission that will have to be written in stone at this summit. So far there's not much sign that will happen.

Asia Times suggests that Gates' frustrations are a reflection of the criticisms in a recent paper written by the US general who commanded forces in Afghanistan from 2003 until 2005, Lt. Gen. David Barno.

He chose to begin his paper devoted to the counter-insurgency strategy in Afghanistan, citing lines by ancient Chinese general Sun Tzu, "Strategy without tactics is the slowest road to victory. Tactics without strategy is the noise before defeat."

Barno wrote that Afghan people's tolerance for a foreign presence was "a bag of capital [that was] finite and had to be spent slowly and frugally" and, therefore, under his charge US forces took great care to avoid Afghan casualties, detainee abuse, or transgressions in observance of respect to tribal leaders or causing offence to traditional Afghan culture.

According to Barno, the slide began in mid-2005 after he and [Zalmay] Khalilzad were reassigned. Washington then decided to publicly announce that NATO was assuming responsibility for the war and that the US was making a token withdrawal of 2,500 troops.

"Unsurprisingly, this was widely viewed in the region as the first signal that the United States was 'moving for the exits', thus reinforcing long-held doubts about the prospects of sustained American commitment. In my judgement, these public moves have served more than any other US actions since 2001 [the fall of the Taliban] to alter the calculus of both our friends and our adversaries across the region - and not in our favor."

Barno implied NATO messed up the top-notch command structure he created. The result is, "With the advent of NATO military leadership, there is today no single comprehensive strategy to guide the US, NATO, or international effort." Consequently, he says, the unity of purpose - both interagency and international - has suffered and unity of command is fragmented, and tactics have "seemingly reverted to earlier practices such as the aggressive use of airpower".

Barno makes some chilling conclusions. First, he says the "bag of capital" representing the tolerance of Afghan people for foreign forces is diminishing. Second, NATO narrowly focuses on the "20% military dimension" of the war, while ignoring the 80% comprising non-military components. Third, the "center of gravity" of the war is no longer the Afghan people but the "enemy". Fourth, President Hamid Karzai's government is ineffectual "under growing pressure from powerful interests within his administration". Fifth, corruption, crime, poverty and a burgeoning narcotics trade have eroded public confidence in Karzai. Finally, "NATO, the designated heir to an originally popular international effort, is threatened by the prospects of mounting disaffection among the Afghan people."

The worst part of Barno's observations is that he's probably right. He may gild his own performance and overlook the fact that NATO got handed a bag of dirt but his conclusions seem well borne out by the facts. The solution, according to Asia Times, appears to be in reconciliation with the Taliban.

"The heart of the matter is Pashtun alienation. The Taliban represent Pashtun aspirations. As long as Pashtuns are denied their historical role in Kabul, Afghanistan cannot be stabilized and Pakistan will remain in turmoil. Musharraf said, "There should be a change of strategy right away. You [NATO] should make political overtures to win the Pashtuns over."

This may also be the raison d'etre of UN secretary general Ban Ki-moon's intriguing choice of a Briton as his new special representative. Conceivably, the inscrutable Ban has been told by Washington that Ashdown is just the right man to walk on an upcoming secretive bridge, which will intricately connect New York, Washington, London, Riyadh, Islamabad and Kabul.

The point is, Britain grasps the Pashtun problem. Britain realizes that the induction of US special forces into the Pakistani tribal areas, or the custodianship of Pakistan's nuclear stockpile, or an al-Qaeda takeover in Pakistan isn't quite the issue today.

By any measure Washington blundered in demonizing the Taliban. Despite all the propaganda it's well known that the Taliban weren't supporting al-Qaeda, it was actually the other way around. There's been no sign whatsoever that the Taliban were aware of the al-Qaeda attacks of 9/11. Sure they're Islamic fundamentalist nutjobs but that description also fits the Northern Alliance warlords they were fighting until the end. Karzai has no intention of dragging Afghanistan out of fundamentalism.

The Americans have heralded their great success in Iraq in getting the Sunni resistance to turn on the Sunni al-Qaeda terrorists in their midst. There has been some success in that initiative, unquestionably. The Taliban may now be the key to undercutting al-Qaeda in Afghanistan and Pakistan if a way can be found to drive a wedge between the two. We've tried the stick - over and over again - and it hasn't worked. Maybe it's time to see what we can do with a few carrots.
Posted by The Mound of Sound at 2:43 PM