It Could've Been Worse - A Bit Worse Anyway 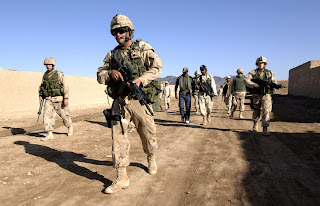 A few days back I wrote that if the Manley report didn't address the lack of troops in Kandahar, it would be rubbish.

Surprise, surprise. The report does focus on the force level issue and says that, if NATO doesn't put up an extra 1,000 soldiers to aid the Canadian contingent, we ought to say sayonara and leave.

What's unclear is whether Manley is talking about an extra 1,000 combat troops. That would actually double the existing Canadian fighting force. It would also require an additional contingent of support personnel.

The report also is understood to focus on the need for medium-lift helicopters. Those are already on order but aren't expected to begin arriving until 2011.

So, what would an extra 1,000 troops do in a province that's 54,000 sq. kms. in area with a population just shy of 900,000? The sad truth is, not much. That would be one combat soldier or counterinsurgent for every 450-civilians, not the 1:25 ratio formulated by Petraeus in the new US counterinsurgency field manual. Together with new helicopters it would permit us to establish a respectable fast reaction force but it wouldn't be enough to maintain permanent security in the villages throughout the countryside. Even with the additional forces we'll still be a garrison force with a few firebases or outposts.

Then there are all the "what ifs" in these recommendations. What if Brussels, already on notice that the Dutch are leaving in 2010, can't come up with the reinforcements the Manley report identifies as essential? What if we don't come up with the medium-lift helicopters? What if NATO does deliver the reinforcements but they come with the "caveats" so many nations impose that render them essentially useless?

Overall, I give the report a D+/C-. It's not as bad as I was expecting but its recommendations are still pretty lame and much too narrowly focused to be helpful. It treats Canada and Kandahar as somehow autonomous, a war within a war, not as an integral component of a larger ISAF and US operation. Perhaps this "heads down" approach was necessary to avoid having to weigh the Canadian mission in the failing context of the larger operation. Yet does anyone think we can really sort out our problems in Kandahar immune to the troubles that beset the rest of southern Afghanistan, that lurk across the border in Pakistan's Tribal Lands and that are smouldering in the warlords' dens in northern Afghanistan?

Ours is not to reason why, ours is but to do or die.
Posted by The Mound of Sound at 8:35 AM

For a reality based opinion on how many troops are needed, please read:
http://www.counterpunch.org/neumann06052007.html

Unfortunately Ron that article appears to be behind a subscriber firewall.

I managed to find it. Neumann cites a RAND study calling for 20 counterinsurgents for every 1,000 civilians or a 1:50 ratio. Petraeus sees that at 1:25. Either way, with 900,000 people in Kandahar province we would need 18,000 on the RAND formula. In several previous posts I've argued for about 20,000 minimum, a Korean-war sort of effort. Even with the Manley recommendations, we'd have barely 2,000 actual rifles in Kandahar, barely 10% of the prescribed minimum.