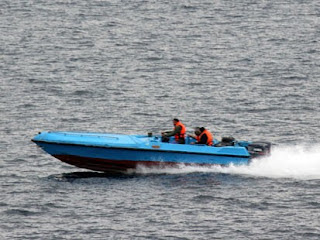 The past six years have been perhaps the darkest in the history of American journalism. Time and again the networks and print jockeys have fallen on bended knee, opened wide and swallowed whatever incredulous bucket of swill was chucked their way. Some have been gullible, some stupid, some cowed into unquestioning servitude, some have just been well-rewarded collaborators.

There was reason to hope that, after the Iraq WMD scam, the American media would find their feet again and stand up. Forget it.

Historian and US national security policy analyst Gareth Porter, writing for Inter Press Service, reveals how the media were all too willing dupes for a planted story about Iranian threats in the Persian Gulf:

Senior Pentagon officials, evidently reflecting a broader administration policy decision, used an off-the-record Pentagon briefing to turn the January 6 US-Iranian incident in the Strait of Hormuz into a sensational story demonstrating Iran's military aggressiveness, a reconstruction of the events following the incident shows.

The initial press stories on the incident, all of which can be traced to a briefing by deputy assistant secretary of defense for public affairs in charge of media operations, Bryan Whitman, contained similar information that has since been repudiated by the navy itself.

Then the navy disseminated a short video into which was spliced the audio of a phone call warning that US warships would "explode" in "a few seconds". Although it was ostensibly a navy production, Inter Press Service (IPS) has learned that the ultimate decision on its content was made by top officials of the Defense Department.

The encounter between five small and apparently unarmed speedboats, each carrying a crew of two to four men, and the three US warships occurred very early on Saturday January 6, Washington time. No information was released to the public about the incident for more than 24 hours, indicating that it was not viewed initially as being very urgent.

The reason for that absence of public information on the incident for more than a full day is that it was not that different from many others in the Gulf over more than a decade. A Pentagon consultant who asked not to be identified told IPS he had spoken with officers who had experienced similar encounters with small Iranian boats throughout the 1990s, and that such incidents are "just not a major threat to the US Navy by any stretch of the imagination."

By January 11, Pentagon spokesman Geoff Morrell was already disavowing the story that Whitman had been instrumental in creating only four days earlier. "No one in the military has said that the transmission emanated from those boats," said Morrell.

The other elements of the story given to Pentagon correspondents were also discredited. The commanding officer of the guided missile cruiser Port Royal, Captain David Adler, dismissed the Pentagon's story that he had felt threatened by the dropping of white boxes in the water. Meeting with reporters on Monday, Adler said, "I saw them float by. They didn't look threatening to me."

The naval commanders seemed most determined, however, to scotch the idea that they had been close to firing on the Iranians. Cosgriff, the commander of the Fifth Fleet, denied the story in a press briefing on January 7. A week later, Commander Jeffery James, commander of the destroyer Hopper, told reporters that the Iranians had moved away "before we got to the point where we needed to open fire".

By any measure it's not sage these days to take much of what comes out of the American media, or their like-minded allies here in Canada, at face value. They've simply allowed themselves - whether out of fear or gullibility, coercion or reward - to become full-fledged partners in a massive and powerful propaganda machine.
Posted by The Mound of Sound at 7:26 PM