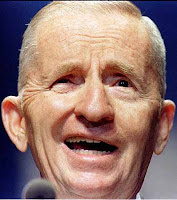 Ross Perot has come out of seclusion, if only to denounce Republican presidential candidate John McCain. Perot recently called Newsweek reporter Jonathon Alter out of the blue to give his first interview in years.
The diminutive Texan wants to settle old scores recalling how McCain called him "nuttier than a fruitcake" in 1992.
"Perot's real problem with McCain is that he believes the senator hushed up evidence that live POWs were left behind in Vietnam and even transferred to the Soviet Union for human experimentation, a charge Perot says he heard from a senior Vietnamese official in the 1980s. "There's evidence, evidence, evidence," Perot claims. "McCain was adamant about shutting down anything to do with recovering POWs."
Other remarks Perot made suggest he's still a tad nutty.
"When I asked about Barack Obama, Perot said he admired his eloquence but thought it "a little odd that we would be less concerned about his background than being a Mormon." Perot was pleasantly surprised when I told him that Obama was a Christian, not a Muslim, and relieved when I informed him that the e-mail Perot (and untold others) received about Obama not respecting the Pledge of Allegiance was a fraud.

Perot isn't a Hillary hater, but he's not a fan either, relating the bumper sticker he received that reads: "Monica Lewinsky's Ex-Boyfriend's Wife for President."
Perot is appalled at the specter of big banks having to borrow from foreigners to stay afloat: "We have to go around the world with a tambourine and a tin cup."
Posted by The Mound of Sound at 4:03 PM

On the upside, Dana Carvey's career may have suddenly been revitalized...