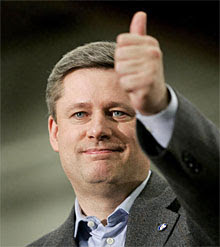 It's up to the Canadian Forces to decide what they will and won't tell us about their actions in Afghanistan. That came from Blockhead himself, our Furious Leader, Stephen Harper, as he lovingly greased himself up to slip to safety from the detainee controversy. From the Globe & Mail:

"The military is free to release information about Afghan detainees if it chooses, Prime Minister Stephen Harper said yesterday, as he was criticized for excessive secrecy on how Canadian troops handle their prisoners.

There you have it, hands off from the Cons. Canadian Forces will say what they like, when they like and to whom they like, so don't blame the Harpies if they're not up front, blame the military. Wait a second, that doesn't sound quite right, does it?

It's not, that is unless Lardo has repealed the gag order he slapped on the Canadian Forces that came to light just two weeks before Christmas. That's when word got out that the Forces had been told that requests for information and interviews had to be pre-cleared with their political commisars, senior officials from the prime minister's office.

"The Privy Council directive applies to all matters of "national importance" but is primarily focused on shaping information relating to the war in Afghanistan."

Oh my goodness, Harper appears to be - lying. Worse, he seems to be hanging the Armed Forces out to dry to give himself political cover. Not Harper, he wouldn't do that, would he?

yes, the blubbery bastard leaves it vague enough he can control as he wishes, and deflect responsibility when it suits him.

Blaming the military will lose him votes, though. CON supporters tend to be very big defenders of Hillier & Co. My guess is their first loyalty would go to the troops. Party leaders, to them, are interchangable. Only the colours matter.