Here We Go Again, Bush on the Rampage! 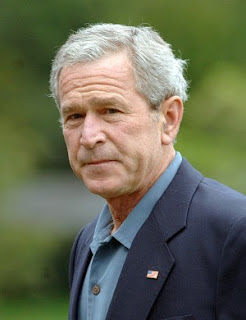 President George w. Bush isn't one to let intelligence (his own limited supply or anyone else's) get in his way. It sure didn't stop him in his obsessive quest to conquer Iraq.

The latest Newsweek reports that Bush isn't about to let a bothersome National Intelligence Estimate on Iran get in his way now either.

"...in private conversations with Israeli prime minister Olmert last week, the president all but disowned the document, said a senior administration official who accompanied Bush on his six-nation trip to the Mideast. "He told the Israelis that he can't control what the intelligence community says, but that [the NIE's] conclusions don't reflect his own views" about Iran's nuclear-weapons program, said the official, who would discuss intelligence matters only on the condition of anonymity.

Bush's behind-the-scenes assurances may help to quiet a rising chorus of voices inside Israel's defense community that are calling for unilateral military action against Iran. Olmert, asked by NEWSWEEK after Bush's departure on Friday whether he felt reassured, replied: "I am very happy." A source close to the Israeli leader said Bush first briefed Olmert about the intelligence estimate a week before it was published, during talks in Washington that preceded the Annapolis peace conference in November. According to the source, who also refused to be named discussing the issue, Bush told Olmert he was uncomfortable with the findings and seemed almost apologetic."

"Bush's national-security adviser, Stephen Hadley, told reporters in Jerusalem that Bush had only said to Olmert privately what he's already said publicly, which is that he believes Iran remains "a threat" no matter what the NIE says. But the president may be trying to tell his allies something more: that he thinks the document is a dead letter."
Posted by The Mound of Sound at 1:47 PM