Is This Where Pandemic is Born? 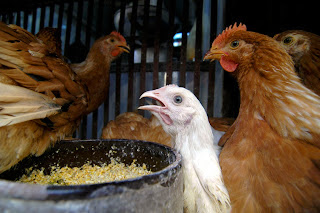 "Bird flu or avian influenza is spreading across Bangladesh. In the last four days, over 1,000 crows have dropped dead in Barisal, Patuakhali and Dinajpur districts, with laboratory tests confirming they were infected with the H5N1 virus.

Despite government efforts to burn or buy the dead birds, in many places the carcasses of dead chickens and crows can be seen rotting in the open."

What makes the Bangladeshi outbreak so troubling is the nature of poultry raising in that country. 70 per cent are "backyard chickens." This means the poultry supply isn't concentrated in farms that can be checked and, where necessary, culled. It also makes detection of the spread of the disease vastly more difficult.

"Habibur Rahman of Mymensing Agricultural University, a leading bird flu expert, and A.S.M. Alamgir, a virologist at the Institute of Epidemiology, Disease Control and Research, now describe the situation as “alarming”.

"Not only crows, about 1,000 ducks died of bird flu in Naogaon District yesterday. Ducks usually carry the H5N1 virus, but do not die. When ducks die, it indicates that the virus is very highly pathogenic. Even the possibility of mutation of the virus can’t be ruled out."
Posted by The Mound of Sound at 7:19 AM