Does Anyone Think We Can Really Leave? 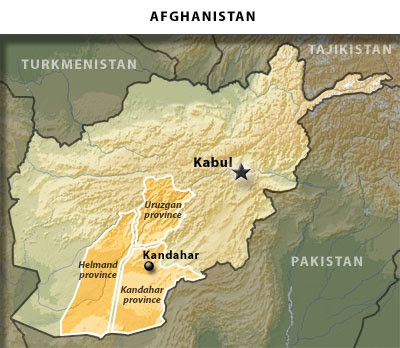 Layton says Canada should pull out, Dion says we need to find a new job, Harpo is pretty much a good Bushie "stay the course" guy. A small majority of the Canadian people want the mission to Afghanistan wrapped up.
Everybody's got an opinion. No matter what side they're on, I don't know if any of us thinks the Canadian contingent in Kandahar can just pull up stakes and leave.
What would leaving Kandahar mean for Kabul, for the Afghani people and for our NATO allies (or at least the few that are actually showing up for work)?
For starters, it would leave a hole, a big hole. It would open an avenue between the unruly Pakistan tribal areas and Kandahar city. On Helmand province, it would leave the Brit's flank exposed to the east and the Dutch flank open to the south in Uruzgan province.
One way or another that hole would be filled in short order. It's what happens when power vacuums emerge in contested areas. The only question would be whether Kandahar would be lost to the insurgency or would be held for the Karzai government by an infusion of American troops.
I expect the US would step in although there'd probably be holy hell to pay for it in Ottawa. NATO boss Jaap de Hoop Scheffer has been an abject failure at his defining task of rallying NATO member support for Afghanistan. If Canada simply pulls out, it's hard to imagine that would somehow strengthen Scheffer's powers of persuasion.
There is another option that hasn't been discussed but I expect soon will be - extending "the mission" for an additional year in order to withdraw in conjunction with the Dutch who claim they're determined to pull out in 2010. I have my suspicions that the Dutch extended to 2010 hoping that Canada will indeed leave in 2009 but I guess that's neither here nor there.
Of course factoring into this decision is what happens in the US elections in November. The Democratic candidates are all talking about substantially reducing America's military burden in Iraq which ought to provide the Pentagon with some ability to expand its Afghanistan force. If, however, Hillary and Obama so botch this election (and they well might) and a Republican like McCain takes over, all bets are off.
This factor can't be over-emphasized. The only reason we got into Afghanistan in the first place was due to the needs and demands of the United States. The one nation, other than Afghanistan itself, that will be impacted most by our departure will be the United States. The depth of that impact will be directly affected by who is running the White House and the state of affairs in Iraq at that time. Don't even think about what might happen if Bush, as a parting gesture, decides to attack Iran while he still can.
When it comes right down to it, the merits of leaving Afghanistan are shot through with uncertainties, layers upon layers of them. It'll be interesting to see how these complexities are acknowledged and addressed when Manley's report comes out this month.
Posted by The Mound of Sound at 8:41 AM

Well, since you ask ... yes, I really do think we should just pull up stakes and leave.

Well Herb, any ideas how we handle the fallout if we do that?

Thanks for this post. Over at 'Canadians for Afghanistan' we've also posted thoughts on Layton's pitch to immediately withdraw from Afghanistan.

Thanks for your analysis, will be sure to check back here frequently. Please feel free to visit us at www.supportourmission.ca and leave your thoughts.

Sorry to disappoint you, Josh, but I don't support the mission. That'll be apparent if you read just a sampling of my posts on Afghanistan. The point I'm trying to make is that we've been sandbagged be weak federal governments and a manipulative military leadership into a hopelessly flawed mess. I do support our soldiers but, if I could find a way out, I'd pull the lot of them home tomorrow.

Let the Americans step in then. After all its their war, why should we be helping them? If they are so foolish to try to dominate Afghanistan when neither the Brits nor the Russians could, let them come face to face with the real world. Furthermore, this could be the action that brings down the Empire, just like Russian involvement helped kill the USSR. And nothing would bring peace to the world quicker that the US ceasing to meddle in the affairs of other nations.

Larry I fully understand your frustration and you'll get no argument from me that the Afghan debacle is, in great measure, America's responsibility. I just don't know that we can place the Brits and the Dutch in the bind we would create if we bailed out and left their flanks exposed.

I fault Harper and Hillier as much as anyone in this. Hillier ought to have been outspoken in advising parliament of the realities and timing attendant upon deciding to leave and Harper ought to have been shaking Scheffer by the lapels to make him realize we intended to exercise our legitimate right to leave. Instead of that the two of them have both stooged around knowing full well of the predicament they were creating. The mess we're in hasn't evolved accidentally.

First off, this is a very informative blog. I am American aid worker that has worked in Afghanistan for three years and I have always been very interested in Canada's role in Afghanistan. I have spent a lot of time in Kandahar since 2004 and since the Canadians moved in. So hopefully I can provide my friends to the North some insight into what your soldiers are up to.

Second, I am not a Bush supporter and or in anyway a fan of the recent American adventurism in Iraq and posturing towards Iran. But I am a supporter of the world's involvement in Afghanistan. We often forget that NATO's mission in Afghanistan is supported by a UN Security Council resolution unlike Iraq. The mission in Afghanistan truly has global support not just from rich Western countries but low income Eastern countries as well, like India, Bangladesh and Nepal.

Probably the most important thing I can share with you from three years on the ground in Afghanistan is that the Afghans want us there, they want Canadians there, they want the French, the Spanish, the Germans etc. They are not happy that we have not delivered on our promises but they know that their future is tied to the success of NATO, OEF, UNAMA etc. They don't want NATO and the West to go, they just want them to be doing it better.

Canadian troops have a very good reputation among Kandaharis. They see that Canadians are not only fighting but trying to rebuild the province. The Afghans have shown a great deal a sympathy for Canadians soldiers when they have been killed in IED and suicide attacks because Canadian soldiers have shown sympathy for the Afghans when the Taliban carry out illegal and indiscriminate attacks on them.

I would urge Canadians to try and see the value of their troop contributions in this context rather than conflate the wars in Afghanistan and Iraq. It is all too unfortunate that my president's errors in Iraq have detracted from what is the good war in Afghanistan.

I am happy to share more thought with you.

Thanks for your comments, anon. I appreciate your views.

Thanks for your comments, anon. I appreciate your views.