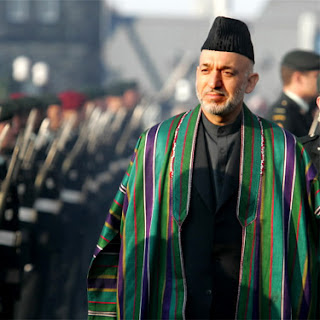 Hamid Karzai is on the warpath, in revolt, and his antics could have major repercussions for the US, NATO and us too. Over the weekend Karzai shook up his Western benefactors by torpedoing the appointment of Lord Paddy Ashdown who was slotted to become the UN's super envoy to Afghanistan. It's a tale of grand intrigue that our media totally missed. Fortunately the story is brilliantly laid out in Asia Times:

Kabul knew for months about the impending appointment of Ashdown as a key step in a new NATO strategy spearheaded by the US and Britain, aimed at stabilizing the Afghan situation. Karzai knew detailed planning had gone into the move involving NATO, the EU and the United Nations Security Council. But Karzai waited patiently until the eleventh hour before shooting it down publicly on Saturday in a interview with the BBC while attending the World Economic Forum meet in the Swiss resort town of Davos. The move was pre-planned and carried out in a typical Afghan way with maximum effect.

Karzai insists there has been a serious misunderstanding of motives because Kabul had never taken a "decision" on Ashdown's appointment. He is perfectly right in saying so. But in actuality, Karzai has put on display his proud Afghan temper. He has taken umbrage that Washington and London took the decision on Ashdown's appointment in consultation with Brussels and thereupon got UN secretary general Ban Ki-moon to execute it, all the time taking Kabul's agreement for granted.

Karzai anticipated that Ashdown, true to his reputation in the Balkans, would function like a colonial viceroy. Karzai knows that the Western agencies and organizations operating in Afghanistan lack coordination. But a "unified command" under Ashdown would create a counterpoint in Kabul to Karzai's own authority. Karzai didn't want that to happen.

The bottom line concerns Karzai's political future. He sizes up that Ashdown is part of a political package leading toward a post-Karzai era. There has been persistent chatter in recent weeks that Zalmay Khalilzad, US ambassador to the UN - an ethnic Afghan - is in the mix for a run as president of Afghanistan. According to Washington Post columnist Al Kamen, Karzai took the rumor seriously and point-blank asked Khalilzad about it when the two met in London in October, but Khalilzad "didn't give a Shermanesque response".

The UN's capacity to spearhead the political process in Afghanistan now stands seriously impaired. This deprives Washington of a neutral international bridge - but under its control - leading toward the Taliban camp, which is a pre-requisite for commencement of any meaningful intra-Afghan dialogue. Meanwhile, the war hangs perilously on the edge of an abyss.

Almost everyone is talking to the Taliban one way or another. Confusion is near-total. All this is happening at an awkward time when NATO lacks a counterinsurgency strategy. In particular, Britain, which lately assumed a lead role within NATO, has been embarrassed. Karzai singled out British operations in Afghanistan for criticism in an interview with the Times newspaper of London on the eve of his meeting with British Prime Minister Gordon Brown in Davos on Friday. Karzai alleged that Afghan people "suffered" from the coming of the British. He had little praise for the 7,800 British troops deployed in Afghanistan. He said, "Both the American and British forces guaranteed to me they knew what they were doing and I made the mistake of listening to them. And, when they came in, the Taliban came."

As The Times commented, "British forces believe that, in many respects, their Afghan allies pose more of a challenge to their mission than the Taliban ... It is the Afghan government that is now proving more of an obstacle to stability in an area where a mixture of official corruption, ineptitude and paranoia are stymying British efforts."

...it remains to be seen how long Washington can keep Karzai away from the reach of the Russia-dominated Collective Security Treaty Organization and the Russia and China-dominated Shanghai Cooperation Organization. From the Ashdown saga, Karzai must have realized his capacity to shake up US strategy in the region. In an interview with CNN in Davos on Thursday, Karzai said, "We have opened our doors to them [Iran]. They have been helping us in Afghanistan." Karzai then insisted that the Bush administration has "wisely understood that Iran is Afghanistan's neighbor".

Musharraf will know that his own defiance of Washington's recent attempts to dictate the nature of the political set-up in Islamabad now enters a conclusive phase. He will know that with such a first-rate mess-up in the war in Afghanistan, Washington is hardly in a position to be intrusive, let alone dictate terms of engagement to him. In a curious way, Karzai has considerably smoothened for him the passage from now until the elections in Pakistan on February 8. In all probability, Pakistan, which has excellent intelligence outfits in Kabul, knew in advance that Karzai was about to give shock-and-awe treatment to Washington. Clearly, Musharraf has begun finger-pointing at anyone who will even remotely suggest the need of deploying US troops on Pakistani soil.


Timely backing from China has also strengthened Musharraf's hands. In an extraordinary commentary titled "No more turmoil in Pakistan is permissible", China's People's Daily has come out with a whole-hearted endorsement of Musharraf's leadership. It said, "President Pervez Musharraf has resorted to a host of viable measures ... Pakistani government has been making unremitting efforts in defense of the supreme national interests ... Some opposition forces at home and a few powers overseas impose pressures or punitive measures against Pakistan in the name of 'democracy', 'freedom' and 'opposition to terrorism'.

Musharraf must be greatly relieved that Beijing has finally broken its silence and come down unequivocally in support of him at a crucial juncture in his desperate resistance of the US game plan to remove him from power and to disgrace the military by deploying American troops on Pakistani soil.

Increasingly, Karzai and Musharraf find themselves in a somewhat similar predicament. They cannot do without American support, but they do not accept US pressure tactics. They know US regional policies are part of their problem within their own countries and, therefore, they need to differentiate themselves for their political survival. Paradoxically, their attempt is to perpetuate the US's dependence on them while they work at consolidating a political base of their own, which is independent of US control. In Karzai's case, the 3-4 million votes that Musharraf can mobilize from the Afghan refugee population in Pakistan will always remain a decisive factor in his re-election as president. Besides, there are regional powers - China and Iran in particular - which are keenly watching the geopolitics surrounding Pakistan and Afghanistan. The Iranian thinking is that there is a concerted US-Israeli plot to destabilize Musharraf's regime with the twin objective of the US establishing a base in Pakistan for its military intelligence operations directed against Russia and China and at the same time for neutralizing Pakistan's nuclear capability.

...Both China and Iran are keen on the stability of the Karzai government. Both would like Karzai to continue to explore the parameters of a neutral, independent foreign policy free of US manipulation. Both visualize that Afghanistan can serve as a vital land bridge between them, playing a strategic role in the rapid expansion of Sino-Iranian relations.

Wheels spinning within wheels and we're stuck debating another thousand soldiers for Kandahar so that we can prop up a guy who is working hard at cross purposes and whose country appears headed in a direction of its own. Astonishing, unbelievable. Are we really so naive, so myopic, maybe even so stupid?
Posted by The Mound of Sound at 8:58 AM

Good article from a fellow academic on why the Ashdown appointment needed to be shot down. The link is below
http://www.spiked-online.com/index.php?/site/article/4387/

The good thing about Ashdown's rejection is that we may get a representative who would be more sympathetic to the collective interest of NATO like the guy below
http://www.aftenposten.no/english/local/article2224940.ece

I read the articles, Shroom, thanks. I've lost confidence in Karzai. His 11th hour 59th minute gambit has to be seen for what it was. If Karzai had legitimate reasons for opposing Ashdown he had all the time in the world to work with the UN/NATO on the issue. He avoided doing that and staged a coup de main instead. Don't overlook the signifigance of that and what it means for how much reliance we can place on this guy.