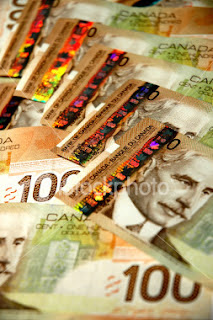 Whenever Brian Mulroney falls into controversy it always seems to involve cash. Long before he started pocketing envelopes of the stuff from Karlheinz Schreiber, Mulroney was awash in good, old fashion, paper currency - bundles of it.

The Commons ethics committee is planning on calling two men who can shed some light on this. One is Mulroney's former Chief of Staff, Norman Spector, and the other is the Mulroney's private chef, Francois Martin. From the Toronto Star:

"Spector, chief of staff to Mulroney in the early 1990s, wrote about the payments in a forward to Toronto lawyer and author William Kaplan's book about Mulroney's relationship with Schreiber.

"Mulroney was not a rich man. Party funds were being drawn, and one of our staff was assigned to pore through personal expenses to determine if some might be reimbursed. Every month I cashed a cheque at a local bank and remitted the funds to Mila," Spector wrote.

The committee also expects to hear from François Martin, Mulroney's former chef, who has told of transporting thick envelopes of cash for the family.

In Stevie Cameron's 1994 On the Take, Martin tells of visiting Mulroney aide Fred Doucet in the Prime Minister's Office to pick up thick envelopes of cash and deliver them to Mila Mulroney.

"Cash came in like it was falling from the sky," he said in the book."

Author Stevie Cameron quotes Martin as telling her Mulroney kept a large safe in the basement of 24 Sussex Drive to hold the cash. She also claims that when Mulroney bought his $1.7-million retirement home in Montreal, he and Mila had it extensively renovated. The renos, she claims, cost close to $1-million and much of the cost was paid - in cash.
Posted by The Mound of Sound at 11:30 AM

There are two observations that can be made from Spector’s comments. First, Mulroney had a ledger of personal spending “…and one of [the] staff was assigned to pore through personal expenses to determine if some might be reimbursed.” How much did Brian and Mila spend each month, anyway?

Spector said “Party funds were being drawn… Every month I cashed a cheque at a local bank and remitted the funds to Mila." So, there were bank statements. In this regard, we may ask, ‘Where did the “Party” get its funds?’ Did offshore money move through “the Party” into cash into the envelopes into Mila’s purse(s)?

Good questions. Was this cash not "income" for tax purposes? Where did it all come from? It doesn't sound like the PCPC was the sole source of these donations. There's a natural skepticism that's triggered whenever people are dealing in bundles of cash. We have in our minds a type of person who habitually deals in cash - the sort of person who doesn't want to leave a trail. That's not to say Mulroney worked that way but I'm sure not comfortable that he didn't.

Well, Mound of Sound, you asked "Good questions. Was this cash not "income" for tax purposes? Where did it all come from?"

The definition of income as per the Income Tax Act is something like "A receipt pursuant to employment, business, or property..."

Would Mulroney have received the money, if he had not been in the office of (i.e. 'employed as') PM? I think not. So I say "Income."

Mulroney makes Revenue Canada look shabby for ignoring Stevie Cameron findings. Kind of like there's one standard for mere Canadians, and a look the other way for a select few "special" Canadians. But it's not supposed to work that way.