What Lurks Across the Border Inside Pakistan 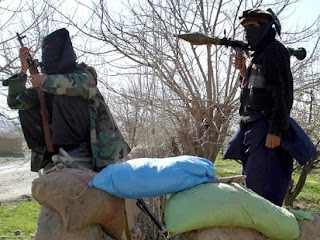 Canadian journalists have generally done an abysmal job of covering the conflict in Afghanistan and events in neighbouring countries. The embedded scribes seem to be the worst. They either turn into a weird sort of Florence Nightingale with a keyboard or they're reduce to parroting the litany of absurd claims that regularly issue forth from Canadian commanders.

Absurd? I wish I could recall how many times I've read some Colonel boast that we have the insurgents trapped here or there, leaving them to choose between surrender and death, only to have them vanish, in good order with their weapons, to come back and fight another day at a time and place of their choosing. According to the boss, the Big Cod, Hillier, there were only a "few dozen" insurgents in Kandahar when we went there. Well those few dozen must have an unlimited supply of lives given the casualties we claim to have inflicted on them.

It's not surprising then that we are left to wallow in near total ignorance of what is actually going on across the border in Pakistan's tribal lands. Military and political leaders freely state that this is the key to winning in Afghanistan. Every now and then one of them loudly proclaims the need to go in there and winkle out the terrorists. We regularly blame Islamabad for not doing enough. So just what is going on in the Pakistani border territories?

In the January 28th edition of The New Yorker, journalist Steve Coll has an excellent article on Benazir Bhutto which provides a fascinating window into the state of the "Tribal Lands." Here are a few excerpts:

"...During 2004 and 2005, as the Taliban and Al Qaeda increased in strength in Pakistan, they carried out attacks on American and NATO forces in Afghanistan. The bush Administration urged President Musharraf to dispatch the Pakistani Army into South Waziristan to disrupt them, and Musharraf agreed to do so. The Army had never before entered the Tribal Areas to subdue them by force' after British troops were defeated there, during the late imperial period, colonial and Pakistani governments had favored a system premised upon local autonomy. The invasion began poorly and has been deteriorating ever since; the Army has taken significant casualties, and, while its forces have killed or captured some Taliban leaders, they have also set off popular resentment."

"...By late 2006, after sporadic battles that received little international attention, the Army had been, in essence, "militarily defeated" by the Taliban and Al qadea, as a US Defence Department official put it."

"...Tariq Waseem Ghazi, a retired three-star general who served as Pakistan's Defense secretary between 2005 and 2007, told me that, among Pakistan's top commanders, 'everybody felt there was a need for a political accommodation' in the Tribal Areas. 'I think it was unreasonable at any time that we should go into the Tribal Areas with the same kind of motivation and fervor with which the coalition went into Afghanistan or into Iraq' he said. '...I kept telling them, Shock and Awe is fine for you if you fly in from the U.S. or Canada, but shock and awe is no good for us when we have to live with the Tribal Areas as a part and parcel of Pakistan.'"

"...Pakistan could have several motives in undertaking a covert program to aid or protect the Taliban: appeasing Pakistan's radicalized Pashtun population; pressuring Afghanistan's government into political concessions favorable to Pakistan; or preserving a historically friendly militia as a hedge against an eventual American withdrawal from Afghanistan."

"...Shuja Nawaz, the military historian, said he doesn't think that among the senior generals and intelligence officers 'there's any consensus that the Taliban are the enemy.; He explained, 'so long as the Taliban don't attack the Army, it sees them as perfectly fine. And, potentially, if they take over Afghanistan, it sees them as a group that would have at least some sympathies with Pakistan and vice versa."

The good/bad news is that the Taliban and al Qaeda appear to be turning their attention, this year at least, away from Afghanistan and onto Islamabad instead. There is always some hope that this may shatter their support within the ranks of the Pakistani Army and its intelligence service. That, however, remains to be seen. Pakistan seems to be descending into a state of political, religious and military turmoil. Rather than pressuring Musharraf we may be better off doing everything we can to support him.
As for fanciful notions of going into the Tribal Lands and North West Frontier to clean out the Taliban and al-Qaeda, we'd better be prepared to go in with a much bigger force than we have in Afghanistan today and we'd better be ready, before we set foot in there, to accept very heavy losses for a very doubtful outcome.
Posted by The Mound of Sound at 11:29 AM