And Now, Wrap Up the Disgruntled Women's Vote 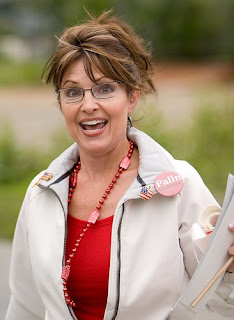 John McCain is all about experience. He says so every chance he gets to anyone who'll listen.

So, who did John pick as his veep candidate - the person who will have to take over the reins in the Oval Office when his already wobbly mind packs in?

It's Alaska's rookie governor Sarah Palin! Sarah has all the credentials one would expect in someone second to the throne. She was the mayor of Wasilla, Alaska until just two years ago and has held the governorship of that state since, gasp, 2006.

Mayor of a town of 6,000 to vice president in two easy steps. Just add water and stir!

Why did McCain pass over far more "experienced" prospects? Hmmm, I don't know, can you figure it out?

Oh great, we're going to have the mayor of Wasilla as McCain's "partner in governing."
Posted by The Mound of Sound at 8:35 AM

Apparently state investigators are looking into whether she pressured the Public Safety Commissioner to fire "an Alaska state trooper involved in a rough divorce from Palin's sister."

Oh well, at least she's not Dan Quayle. Interesting that she comes with this ethics baggage. Then again, Republican + Alasaka = controversy.

I think we can all assume Alaska is off the table for the Democrats.

CNN just talked about the history of this moment - in a bold strike - for balance.

Of course, by history they mean Republicans selecting a woman on a major ticket 2 decades after the Democrats did.

Well, it's now becoming clear that this is all about bringing the family values vote home.

The Maverick just stole a page-book from 1985.

Got to get back to work now. My disillusionment in McCain is complete.

Look for revivals and prayer sessions for McCain / Palin by mid-October.