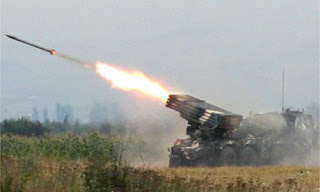 Georgian strongman president Mikhail Saakashvili is pleading for American intervention against the Russian incursion into South Ossetia.
Saakashvili gambled that he could roll up the Ossetian separatists and drive Russian peacekeepers out of the breakaway province but opened up a hornets' nest instead. The Georgian president escalated tensions by bombarding the Ossetian capital with rockets, artillery, tank fire and aerial bombardment.
Moscow, instead of retreating has retaliated with its own airstrikes and has sent tank columns pouring into Ossetia in support of the separatists. Cossacks from North Ossetia are likewise heading south to help oppose the Georgian forces.
The situation somewhat resembles the Kosovo problem. Ossetians are ethnically different than Georgians and, like the Kosovor Albanians, have been attacked by the larger, parent state. Where NATO intervened on behalf of the Kosovors against the Slavik Serbs while Russia had to sit by and watch, this time it's the Slavik Russians coming to the aid of the Ossetians while the West, taken by surprise, has been sidelined, at least for now.
The idea of a direct Russian-American military showdown over Ossetia seems improbable but, then again, there's always the Cheney wild card.
Posted by The Mound of Sound at 12:19 PM