Canada's Troubles in Afghanistan Start at the Top 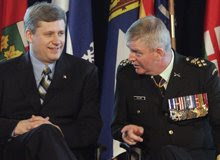 Here are a few home truths to keep in the back of your mind while weighing our progress in this maniacal war without end on terror:

1. An otherwise winnable war can be lost by bad military leadership.

2. An otherwise winnable war can be lost by bad political leadership.

3. Wars are rarely lost at the 11th hour. The groundwork for failure is often laid early in the game.

5. Superior technology and firepower are a poor substitute for competent political and military leadership.

6. Time is a precious and limited commodity in warfare. Fatigue sets in quickly and can be fatal.

7. Rarely are wars fought for the reasons fed to the public.

Pretty much each of these truths comes to bear on the way in which we perceive the war in Afghanistan. Our military leadership has been haphazard - at best. Read General Petraeus' counterinsurgency field manual, FM 3-24. This eye opener essentially digests the experiences and lessons of asymmetrical warfare since the days of the Romans. The players change, their weapons change, but the core principles survive. Then, having read that enlightening work, apply its recommendations to what we've been doing in Afghanistan. Sorry, I can 't do that for you, there's far too much material involved. Just, please, don't tell me we have the slightest hope of "winning" in Afghanistan until you've at least read the manual (which is, by the way, available, at no charge, in PDF format on the internet).

You don't need to take some measly 4-star American combat general's word for it. Read Caesar, read T.E. Lawrence or so many others. You'll find it all there. But - don't argue Afghanistan with me until you're able to discuss the salient aspects of guerrilla warfare.

By Petraeus' own writings, we're making every mistake in the book (including FM 3-24) in Afghanistan. I so wish the ghost of Colonel Lawrence had been around to whisper a bit of this reality to General Hillier before he cajoled his way through Paul Martin's office and on into Kandahar. Which leads me to bad political leadership.

I fully accept that Paul Martin fell for a song and dance act on Afghanistan. If, as Martin aides claim, he only approved it on Hillier's assurance that the forces could take it on and take on another major mission at the same time, what was Hillier doing giving this assurance? Either Hillier was smart enough to know that wasn't true - or he wasn't smart enough to know whether it was true. No matter which end you approach this from, it was lousy military leadership.

Then, as the enemy grew in strength and the mission took on burdens far beyond the worst-case scenario given Martin - Hillier did nothing to see that the Canadian force was appropriately reinforced.

Look at it this way. Hillier got the PM to sign on - and openly told Canadian TV cameras - that the 2.500-strong force was sufficient because we were going into that large province but only to kill "a few dozen ...scumbags." Given the history of Afghanistan, all its troubles and associated circumstances and perils, how could anyone say that? You don't take on missions - voluntarily, even beggingly - unless you're absolutely certain that the force you take will be able to cope with a worst-case situation. And then, when that worst-case situation emerges and catches you shorthanded, you do nothing to increase your numbers to the size of the force you ought to have taken in there when you first outlined the mission?

Imagine a Canadian general going to the prime minister of the day and coming out with approval for a war that will utterly exhaust our armed forces and leave them much less able to deal with any other threat anywhere, including Canada itself, that may emerge - and for years, possibly generations. Imagine that. Yet, somehow, that's precisely what's staring us in the face right now. If Hillier didn't warn Paul Martin off this godawful predicament, he ought to come out and explain why not? The Canadian people need an answer from The Big Cod on that one.

Sorry, ladies and gents, but winding up where we are right now , given all the clues and indicators, was foreseeable as at least "possible" if not straight out "probable." Why did this seem to come as such an unimagineable surprise by our military leaders?


Our political leadership failed - and continues to fail us. I don't believe you need to have much expertise in military history to see this coming down the line. Somehow Paul Martin accepted some pretty baseless assurances when he and his organization ought to have known better. But if benign gullibility is Martin's crime, his successor's has been far more culpable. Harper wants to be one of the boys, to stand shoulder to shoulder with the leaders of the other English-speaking democracies, the good old white boys.

Harper's leadership on Afghanistan is entirely politically-driven. That's bad news for the troops because it means their mission is compromised by a political agenda. The best trained, best equipped and most capable and motivated troops cannot overcome weak political and military leadership.

The Afghanistan war, or at least our chapter of it, began in 2001. Now we're in the bottom half of 2008. In the course of those seven years a lot has changed, not much of it for the good.

Afghanistan remains a failed state. Why? One reason is the destabilizing role of the insurgency, a problem compounded by the chaos in neighbouring Pakistan. That, however, is only one reason and there are others. Another key reason is that a strong Afghan state with a powerful central government is not in the interests of some very key players, among them the warlords (to whom we've handed over most of the country) and the drug barons.

It's no accident that Hamid Karzai remains the mayor of Kabul. He exercises only those powers the warlords are willing to give him and we're not doing a damned thing about that. Why? Because that would risk bringing us into conflict not only with a Pashtun insurgency but also with the Hazara, Turkmen, Tajik and Uzbek leadership. We'd be at war with everybody.

Time is a precious commodity in warfare and seven years is an almost unbelievable amount of time for a war and yet, as Milne noted in the previous piece from the Guardian, we've not achieved a single objective we had for invading and occupying Afghanistan.

There's no faulting our troops in this. They're not responsible for the abject failure of their leadership, political and military. The soldiers at the sharp end are doing a terrific job. They're well trained, committed and very capable but they can't overcome their shortage in numbers or the fundamental flaws inherent in "the mission" that will deny their efforts any meaningful victory.

It was stunning to read last week that the National Post itself has clued in to the fact that we're woefully understrength in Afghanistan. Wow, and it only took them seven years to notice! Even the Spot understands that we can't win in Afghanistan with the paltry forces we've deployed to Kandahar. Maybe if the Spot can figure that out there's hope yet that our politicians and generals may also reach that same state of belated enlightenment.