The Temptation of Vlad Putin 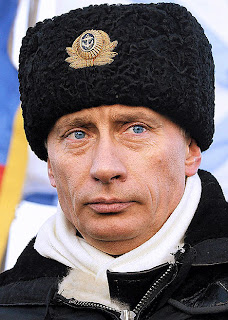 What is Vlad Putin's game? I think it's just possible that NATO has presented him with a temptation he can't resist. It may have given Putin the opportunity to test NATO's resolve and explore the tensions that pervade the alliance. Putin may even sense a possible opportunity to fracture NATO's already wobbly solidarity.

Look at it from Vlad's perspective.

1. He knows that the major Western European powers are going along with Washington very reluctantly. They need Russia a lot more than they need or want Georgia. Russia is a main source of Europe's natural gas supply and it's become a vital market for Western European exports.

2. He knows that NATO's eastward expansion through the Balkans and Caucasus has been American-driven and that the US has pretty much ignored its traditional allies' reservations which, incidentally, included the very prospect of a Georgia-style conflict.

3. He knows that NATO has shown itself something of an alliance in name only in Afghanistan with some nations ducking the mission altogether and others placing such severe restrictions on the use of their deployed forces as to undermine their benefit to ISAF.

4. He knows that he can afford to test the waters. If the heat gets too much, all he needs to do is order his mechanized forces to drive back a few hundred kilometers and all will be forgiven.

5. He knows that the Europeans will ensure that NATO's response will be mild at worst. The Washington ideologues may have an appetite for reviving the Cold War but the Euros, who dealt with it in their backyard for half a century, want no part of that.

No, when Nick Sarkozy leveled his "or else" ultimatum, he might just have presented Putin an opportunity he can't refuse to test NATO's heart - and its spine.
Posted by The Mound of Sound at 8:38 AM