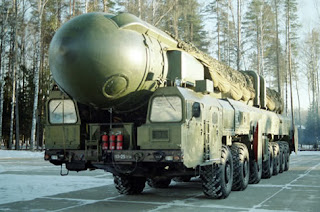 When Russia goaded that idiot Saakashvili into bombarding South Ossetia and then retaliated by invading Georgia and, later, recognizing Abkhazia and South Ossetia as independent states, our leaders turned bright red and damn near blew up. Russia wasn't going to get away with that, no sir. Why, Russia would feel the sting of our sanctions and, better yet, we were going to boot it right out of the G8 too! That'd set Moscow a reeling.

Putin, it seems, has the measure of Russia's vulnerability to Western retaliation - right down to the last kopek. He knows that the consequences, if they materialize at all, will be insignificant compared to the popularity he'll enjoy at home - where it matters.

This isn't just about Georgia or the autonomy of these two, small states. No, it's much bigger than that. It's about Western solidarity and how far that can be stretched.

Europe doesn't want to get caught in the middle of a BushChehney pissing match with the Kremlin. Winter isn't far off and the Euros know that their supply of Russian oil and gas could be the first casualty of American adventurism.

The European Union made the requisite threats of sanctions against Russia but The Guardian reports the EU is now backing away from any action.

Russia's foreign ministry spokesman, Andrey Nesterenko, ...lambasted Nato for "putting pressure" on Russia and said that there could be "irreversible consequences" for stability in Europe. Nato had no "moral right to lecture Russia," he added.

The Kremlin's defiant and unapologetic tone comes ahead of a special EU summit in Brussels on Monday, called by France, to discuss the EU's future relations with Russia. On Thursday, France's foreign minister, Bernard Coucher, intimated that sanctions against Moscow would be discussed.

Yesterday, though, the EU appeared to be rapidly retreating from this position.

Moscow has made clear it will respond to any punitive measures from Brussels, which could include the suspension of a new EU-Russia partnership agreement. "The time to pass sanctions has certainly not come," said a senior diplomat from France, which holds the EU presidency.

Analysts in Moscow today said that Russia's leadership was relatively relaxed about the threat of EU sanctions. "I don't think the contemporary west has any means to punish a state that is not quite a rogue state," Yulia Latynina, a commentator with the independent Echo of Moscow radio station told the Guardian.

She went on: "The Kremlin didn't take Tbilisi and didn't shoot (Mikheil) Saakashvili. What the west can really do — expelling Russia from the G8 or the World Trade Organisation — isn't important.'

Like it or not, the East-West game is only getting started. Yesterday Russia successfully test-fired its new, long-range "stealth" missile, the Topol RS-12M specifically designed to defeat the anti-missile batteries Bush intends to deploy in Poland.

China also stands to get dragged into this standoff via the SCO or Shanghai Cooperation Organization. Putin is seeking SCO support for his gambit on South Ossetia and Abkhazia. Iran is also looking to take advantage of the tensions to strengthen its ties with Moscow and seek entry into the SCO. Iran would also like to get its hands on Russia's latest-generation S-400 surface to air missile batteries. The mere rumour of that has already given Washington and Israel fits.

There's a lot at stake in this brinksmanship including the fate of NATO. Without unity the Alliance makes little sense and yet the interests of Western and Central Europe are not in harmony with those of Eastern Europe. In a mutual-defence alliance you should never admit nations you really aren't willing to fight to defend if it comes right down to it.

I think NATO is hopelessly overextended and I think Vlad Putin thinks that too. If I'm right, this problem is bound to get worse before it gets any better.
Posted by The Mound of Sound at 9:25 AM

It's amazing how leftists support Putin.

Should we be surprised?

After all Pierre Elliot Trudeau was a communist himself.

This psot is a perfect example fo the some leftsists and their infatuation with communists.

Are you sane? You would need to be delusional to conclude that I support Putin. Get some help.

If you don't support Putin, then why don't you bash him instead of the democratically elected leader of Georgia?

In case you didn't know Russia planned on attacking Georgia for months.

This confirms that Russia had planned this attack all along, at least since July 6th 2008.

Why don't you suuport Georgia instead of blaming them.

What do you think about the link I gave you?

I guess you don't have any logical answer.

i didn't think so.

Bashing Putin achieves precisely nothing. If anything it's a pointless distraction from the real issue - coming to grips with just what he's up to.

Did the Russians goad Saakashvili? Of course. That's already mentioned in this post. Was Saakashvili an idiot to give Russia an excuse to invade? Of course.

Do I want a guy with Saakashvili's temperment and judgment in a position to invoke Article 5 of the NATO charter? No way and that's a widely shared sentiment.

I'm not interested in supporting Georgia or Russia in this thing. I'm concerned about NATO unity and its relevance in these distended circumstances.

By the way I did read your link but there was nothing new in it. This information has been around for a long time and lends little insight on what to do with Russia in the future.

A logical answer? Did you pose a logical question? You're overwhelmed with your own importance.