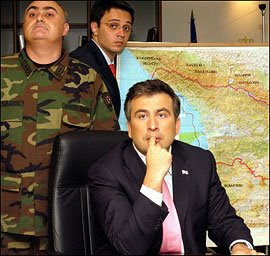 From the Balkans to the Caucusus there are many scores just waiting to be settled. We saw that when Yugoslavia fell apart leading to massacres in Bosnia, Croatia and Kosovo. Then Georgia beset Abkhazia and South Ossetia which eventually led to Saakashvili's pathetic assault on South Ossetia which inevitably backfired, sending the Georgians reeling for cover.
We don't need governments led by the likes of Saakashvili in NATO. They're much too unpredictable and unreliable to be trusted with NATO membership. Saakashvili revealed as much in his remarks today. They show a guy who is out of touch with reality and who thought he could bring the weight of the West into his showdown with Moscow. From the New York Times:
"President Mikheil Saakashvili of Georgia, who has appeared repeatedly on Western television during the days of conflict with Russia, made frantic and apparently overstated warnings on Wednesday that Russian troops were poised to enter the Georgian capital, Tbilisi.
In an interview on CNN, the Georgian president said the Russians “are closing on the capital, circling,” with the intention of establishing their own government.
...he also blamed the West for not intervening more forcefully, nearly a week after hostilities broke out between Georgia and its much larger neighbor.
“Frankly, my people feel let down by the West,” he said.
As for how he planned to halt the formidable Russian forces if they indeed headed toward Tbilisi, he said, “This will not be only Georgian troops” but an “all-out defense.”
Asked if the White House was doing enough, he said: “I just spoke to President Bush. Frankly, some of the first statements were seen as a green light for Russia. They were kind of soft.”
He said the United State should be doing more. “We should realize what is at stake for America; America is losing the whole region,” he said.
He dismissed allegations that Georgia started the fighting. “How can we attack Russia?” he asked. “That’s the ludicrous thing.”'
No, the ludicrous thing is that NATO entertained admitting a country headed by this screwball into the Alliance. It's becoming plain that he thought he'd pick a fight that the West would have to come in and finish for him. Imagine having to send our soldiers to fight the Russians for this joker. No thanks.
Despite all the outrage spewing from our leaders, we'd do well to keep a clear head as to just what really happened in the Caucusus. Check out this opinion piece from Seumas Milne published in The Guardian:
http://www.guardian.co.uk/commentisfree/2008/aug/14/russia.georgia
Posted by The Mound of Sound at 5:05 PM

There a many leaders like the Georgian President in the 19th century. The king of Bulgaria for example.

Still there is another hot spot brewing pretty soon. The Transdinestrians are now clamouring for the Russians to liberate them
http://wiredispatch.com/news/?id=292787

There are no pipeline politics at stake here though. Except for morality.

Unfortunately the West can't intercede in all these crises. It now seems obvious that Saakashvili perceived NATO membership as some sort of authorization to mix it up with Russia. It will be interesting to see if he's still Georgia's head of state two weeks from now.

It really bugs me that some people are so in favour of kepping non-Georgian speaking parts of Georgia in Georgia and yet are also in favour of on an indepedent (from Russia) Georgia.

You don't need South Ossetia for your stupid, highly subsidized, pipeline. Relax France and all.

"It will be interesting to see if he's still Georgia's head of state two weeks from now."

I expect you to say something like "serves him right" if the Russian tanks moved into Tbilisi and treats Saakashvili like Napoleon III.

You misread me 'shroom. I genuinely hope Russia will withdraw from Georgia as quickly as possible. The longer Medvedev and Putin dally in Georgia, the greater the prospect of political haymaking in Washington. I just wish we could find a means of alleviating Russian paranoia. That's one situation we could all do without. With John McCain making Barry Goldwater seem like a complete pussy, the situation is and ought to be worrisome for all of us.

Russia has internal problems of its own, starting with the siloviki class. People who came from a LeCarre novel. Putin as the spy who came out of the Cold and became President. They are the ones left in an economy dependent on oil and selling arms to Third World countries. Most of the entrepreneurs are now enjoying life in Marbella and Boca Raton.

Will there be a new generation of enlightened Russian leaders? The siloviki are smiling now since oil is at $120 a barrel. A lower oil price may make the Russians see some sense that they are building castles in the sand.

Sarkozy and Merkel will continue to be a thorn on the side of the US as long as French and German business interests are taking money from the likes of Gazprom. The key is to recognize Russia's complexes and deal with it in a firm and strategic fashion. You will not see it in a lame duck Bush and are crossing your fingers on Obama. I know there are savvy politicians out there who can do it. Unfortunately their names are not Stephen Harper, David Emerson, and Peter MacKay.