Hey Condi - Shut the Hell Up! 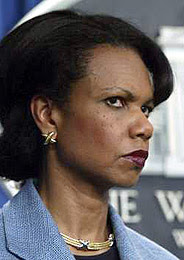 No amount of hypocrisy will stop Bush's main White House shill, Condoleeza Rice from throwing out one ridiculous statement after another.
This is the woman who, after all, gave us the "mushroom cloud" gimmick about Iraq and, like the rest of these mutts, she's shown herself a compulsive liar time and again. Yes, that's right, Condoleeza Rice is an inveterate liar, a wilful prevaricator, unrepentant fabricator, shady dissembler, an unscrupulous tale bearer, rapacious charlatan, cheap hustler, low swindler, devious rapscallion and tawdry, sideshow mountebank. What she says is so unreliable, so wilfully and hopelessly tainted, as to be meaningless, farcical even.
Today Condysleaza laid into Russia for the Georgia fiasco. With a straight face, 'Sleaza warned that the time is past when one nation can invade another, occupy it and overthrow a government. Apparently the deadline for that neat trick lapsed in Baghdad in 2003.
Hey Condi, shut the hell up!

I am so tired of the ongoing farce surrounding the idea of how intelligent Condi is, as if somehow she is beyond reproach and somehow immune of responsibility for the horrendous decisions and outright lies of the Bush administration.

thats what I have been blogging about for a week now, these fool trying to take the high road after what they did in iraq...after all russia was attacked, especially the georgian peacekeepers surpise attack on their russian comarades who have been working together eating, living together for years, thats was in a soldiers point of view, an act that cannot be forgiven.

The woman has done nothing in her time as Sec of State. Nothing! And it's unbelievable that there are some who would like to see her as VP to McCain or even to make a run for Prez sometime in the future. What are they thinking! She is just another Bush/Cheney puppet with no thoughts, ability, or authority, of her own.

She has been a total failure as Sec of State.

Tonight - Michail Gorbechev (SP) will be on discussing the situation.