Why We All Have a Huge Stake in America's Election 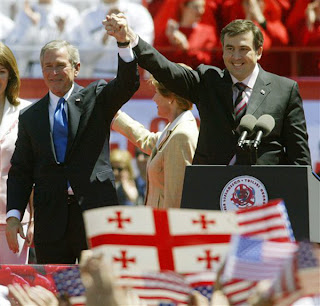 Look at George Bush and South Ossetia. See any connection? Too bad because it's there.

One of the lasting scars we'll all have to deal with after the death of the BuCheney regime will be the enormous damage it's caused to global security. Answer a few questions.

Who drove the revival and spread of Islamist fundamentalism?
Who has destabilized the once Sunni-dominated Middle East and precipitated the ascendancy of Shiite power in Iraq, Iran, Syria, Lebanon and the Occupied Territories?

Who relentlessly pressed for the expansion of NATO right to the borders of Russia?

Who has undermined the strength and economic stability of the very nation the world has accepted for so long as the leader of the Free World, the United States itself?

Who has sparked and then fueled arms races around the world?

These are just some of the dregs of BuCheney that'll be left behind for others to deal with. The Frat Boy and his puppeteer have done their work. They don't see their administration as a failure if only because they managed to enact the social agenda they wanted, albeit with some setbacks such as the Social Security debacle.

George w. Bush meant it when, during his first term, he addressed a black-tie dinner and described the guests as "his base" calling them "the haves and the have-mores." To these people, this top sliver of American society, the Bush years have been grand indeed.

So, what's the connection between George w. Bush, Dick Cheney and South Ossetia? The White House has relentlessly pressured NATO to expand to the very borders of Russia. It was France and Germany that balked at admitting Georgia into the Alliance. America has encouraged Georgian adventurism and defiance of Russia, even backing a thug like Saakashvili (shown with Bush above) while he violently suppressed dissent in his country.

Georgia was no place for clumsy meddling. The Ossetia issue has been around since at least 1922 when the South Ossetia Autonomous region came into being. In fact the Russians have been backing Ossetian autonomy since the reign of Catherine the Great. Since 1925 there has been a movement to unite South and North Ossetia. Georgia moved on South Ossetia in 1989 declaring it no longer autonomous and trying to force assimilation by measures such as declaring Georgian the official language. Fighting between the Ossetians and Georgians has been an on and off reality since 1991.

When America, despite the wishes of the Europeans, moved to consolidate its influence with Georgia, it emboldened Saakashvili to the point where he thought he could execute a coup de main while everyone was distracted with the Beijing Olympics.

America's puerile foreign policy has played a direct role in the current fighting and has been reflected in Condoleeza Rice calling for Russia but not Georgia to withdraw entirely from Ossetia. Her rank stupidity and complete disregard for the historical realities at play in Ossetia has been nothing short of breathtaking.

We can only hope that we'll see a new face of America after the November elections.
Posted by The Mound of Sound at 7:01 AM

So totally true. MoS your knowledge of global geopolitical situation is extraordinary. BuCheney have screwed US and the Globe.

I suggest you increase your knowledge:
http://www.rferl.org/content/South_Ossetia_Crisis_Could_Be_Russian_Chance_To_Defeat_Siloviki/1189525.html

Anon 1:00 - there is a vast body of knowledge right at your fingertips. Good, reliable, well-researched information that predates the recent conflict and isn't biased spin like the Radio Free Europe piece you reference. Maybe you should increase your knowledge. That shouldn't be too hard.