A Lot of My Favourite People are Dead 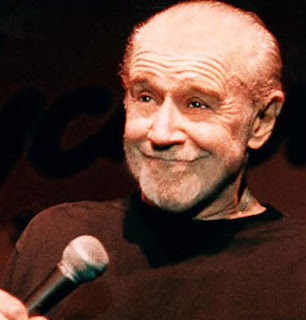 It's true. An awful lot of the good ones, the best ones are gone. In fairness so are a lot of the bad ones although there always seem to be plenty of newcomers to take their places.

One of the good ones now gone was once known as George Carlin. As that great Canadian blog MetaBall reminds us, Carlin had a good eye for what was coming:

"...There is another take on this whole save the planet thing, from an excerpt from "The Planet is Fine" by George Carlin, God bless his lovely soul. (Warning profanity) "We're so self-important. So self-important. Everybody's going to save something now. Save the trees, save the bees, save the whales, save those snails. And the greatest arrogance of all: save the planet. What? Are these fucking people kidding me? Save the planet, we don't even know how to take care of ourselves yet. We haven't learned how to care for one another, we're gonna save the fucking planet?

"The planet has been through a lot worse than us. Been through all kinds of things worse than us. Been through earthquakes, volcanoes, plate tectonics, continental drift, solar flares, sun spots, magnetic storms, the magnetic reversal of the poles...hundreds of thousands of years of bombardment by comets and asteroids and meteors, worldwide floods, tidal waves, worldwide fires, erosion, cosmic rays, recurring ice ages...And we think some plastic bags, and some aluminium cans are going to make a difference? The planet...the planet...the planet isn't going anywhere. WE ARE!

I guess George just jumped the line and got there ahead of us.

Whooee! Well, MoundFeller, from one curmudgeon to another, the price of longevity is grief. The longer we live, the more funerals we attend.

I don't reckon we can save the planet. I think we can mitigate the damage we're doing to the livability of the planet, though. I ain't a comedian, though, so I reckon I take a different view with regard to species extinction and man-made pollution that kills thousands of Canadians every year.

Hey JB, thanks for stopping by. I haven't reached the point yet of throwing in the towel and giving up the good fight but I am profoundly dismayed at the total absence of genuine political and social leadership.

Take global warming for example. We tie ourselves up in knots debating that one, inevitably deferring action we need to take now, but get so close to that tree that we lose sight of the forest of existential problems that also must be addressed.

There's not much point putting a new battery into a car with blown connecting rods.

We need leaders with holistic vision, people who can identify the entire slate of core problems all of which must be addressed if we're to succeed on any.

Global warming has to be tackled in conjunction with remedial measures on deforestation, desertification, resource exhaustion, species extinction, pollution of all varieties, freshwater depletion and distribution problems. Toss in others such as nuclear proliferation, terrorism, our unmentioned but steadily heating arms races, population migration... on and on and on.

We're going to need a philosophical and social tide change in global attitudes to deal with these problems. I don't see how anything short of a new set of universal principles aimed at local, regional and global governance can work.

Industrial capitalism just doesn't work any longer. It's incapable of addressing existential threats. The yoke that harnesses it to democracy must be removed. We can only save democracy so why let it be dragged down?

Whooee! I ain't quite ready to throw in the towel, neither, but I'm thinking more about adaptation to a new climate now than about preventing disaster.

My first grandchild will be 2 next week. The second one is expected in mid September. I fret over the world we're leaving to them. I quit realistically hoping for a sea change in governance and society a few years back. I'll keep doin' what I can with the Greens and keep trying to make sure the next generations don't suffer too badly on accounta what our generation has bequeathed 'em.

I'm with you 100% on adaptation. It's pretty sad when those who see the critical need for major social and political overhaul at all levels also reconcile themselves to it not happening.

By the time we achieve a critical mass of awareness we'll probably have already foreclosed our options for collaborative remediation. Once that door is slammed shut we're pretty much left with every man (or nation) for himself. On that level we may be very grateful we live in Canada (if we can keep this place in our own hands).