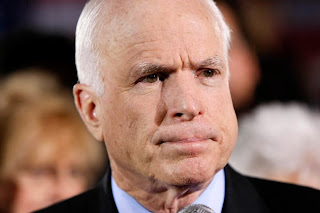 I used to like the John McCain who ran for the Republican presidential nomination in 2000. I don't much care for the guy who calls himself John McCain today. That said I have had moments where I felt really uncomfortable watching the new McCain stumble into brain lock again and again on the campaign trail.
At the outset it was possible to dismiss the occasional lapse as a "senior's moment" but they're coming so fast and furious of late that questions are being raised about whether the Arizona senator is mentally fit to run America.
Check out this interesting discussion at the Talking Points Memo Cafe:

http://tpmcafe.talkingpointsmemo.com/talk/2008/08/is-mccains-mental-condition-ge.php
Posted by The Mound of Sound at 10:22 AM

the more you attack him the more he goes up in the polls,,,obama is finished live with it.